Home to Stoke City since 1997, the Britannia Stadium has space for 27,902 spectators. Former player Sir Stanley Matthew’s ashes were buried beneath the centre circle of the pitch following his death in February 2000; he had opened the stadium in August 1997. As well as hosting Stoke City’s matches, the stadium hosted the playoff finals for the Conference National between 2002-2005, and the England under-21 team in 2002. 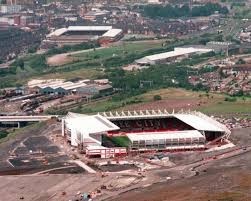