The Proact Stadium is an all-seater ground with a capacity of approximately 10,500. The stadium can be expanded to a 13,000-seater facility if the corner sections of the ground are eventually filled. A memorial garden was opened outside the ground in September 2014 which includes a War Memorial recognising the seventeen football club players and officials who died in the wars of the twentieth century. 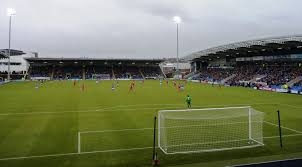