The Exeter City team, which had been staying at Lowestoft since Saturday night, journeyed across to Norwich on Wednesday, and in an evening match at the Nest repeated last season's achievement in capturing a point in a goalless game. One change only was made from the side that drew at Brentford, Brayshaw taking the inside-left position from Vowles, while the Norwich team was precisely the same as forced a division of the points at St James's Park a week earlier.

In warm weather, and before 6000 spectators, the game opened in a spasmodic fashion, Norwich doing most of the attacking in the first quarter of an hour. The ball, however was to much up in the air, and the Canaries' forwards were sadly lacking in the art of combined play, with the result that Coleburne and Feebery were able to repulse the raids fairly easily, and Pym had no grounds for serious anxiety. As at Brentford, the City players were slow in getting into their stride, the Norwich continued to force the game until midway through the first period, when the Exeter half-backs got a grip on things. From that time onwards Norwich did not look likely to win. Wright led the Exeter attack with confidence, and the home defence was frequently hard put to it, whilst at the other end Pym had only occasional long shots to meet. Just before the interval a fine centre by Dockray gave Makin a chance but he failed to get his head to the ball, Appleton then driving it a yard wide. The interval arrived with nothing on the score sheet. Wright tested Skermer soon after the resumption, and Mitton placed Appleton in possession for the winger to middle the ball finely, Skermer scooping it up in brilliant style. Exeter showed greatly improved form in subsequent play, and splendid centres from Appleton and Dockray frequently threatened the downfall of the Norwich goal.

Brilliant Attacks
Presently, however, Laxton and Whitham combined effectively and the movement ended with Laxton shooting strongly, just over the crossbar. Exeter took up the running again and Appleton, Crawshaw and Brayshaw figured in a pretty bit of football which ended in Skermer saving his goal by a full length dive, conceding a corner. In the closing stages the Exeter forwards made a series of brilliant attacks, and were decidedly unlucky not to score. The nearest they came was when a low shot by Mitton struck the post with Skermer beaten, but the ball rebounded into play.

Reserve Match
City Reserves v Bristol City Reserves
The Reserve teams of Exeter City and Bristol City opposed each other on Wednesday evening at St James's Park in a Western League match, and a crowd of 2500 spectators waxed very enthusiastic over a keen and hard fought contest, which ended in a victory for the Junior Grecians by two goals to one.

Green won the toss, and Batten set the ball in motion. The City, however, made the first attack. McIntyre sending behind. Exeter came again a moment later, and when McIntyre centred the ball was met strongly by Hetherington with a header, which went just over the bar. After a spell of end to end play the Exeter forwards obtained possession, and Hetherington, Hesmondhalgh, and McIntyre figured predominately in a capital forward move, to which Eddie Jones, the old "Grecian," applied the closure.
The next incident of note was a brilliant solo effort along the wing by Keen, who essayed a shot. Chave cleared in spectacular style, just as the ball was about to enter the goal between the angle of the upright and the crossbar.
Stevens and Brown were next conspicuous, but Betteridge's clever defence prevailed. Exeter were now doing the major part of the attacking, and Hesmondhalgh sent in a splendid long shot which Hughes did well to put over. Play has been in progress for 20 minutes, when, somewhat against the run of things Batten broke away and sprinted half the length of the field to score a lovely goal. His final shot was perfectly delivered, the ball entering the net in the bottom right hand corner, well out of Chave's reach. Hughes tipped over a good shot by from Hesmodhalgh, and Exeter were striving hard for the equaliser.

Second Half.
Hughes was quickly in action, saving from McIntyre. The City re-doubled their efforts, and after 10 minutes were rewarded, Kelland winding up some clever work on the wing with a neat pass to Hesmondhalgh, who beat Hughes with a smart shot. In further attempts Heherington, Green and Lakin were all conspicuous in trying to give the Grecians the lead, and only a gallant display by Hughes was saving Bristol at this stage. 10 minutes from the finish Kelland skilfully dodged two opponents and let fly at the Bristol goal, but Hughes again saved by throwing himself full length at the ball and pushing it around the post. Green next went through with the same result.
Then, amid hearty cheering, Hesmondhalgh secured the goal. The ball had come across from Kelland, and the home pivot drove it home in no uncertain manner.

Notes on the game.
The Exeter Reserves gave an excellent display all round. The amateur goalkeeper, Chave, played very well, and the backs were a sturdy resourceful pair, with Betteridge, who joined the City from Boscombe during the summer, showing exceptional powers of recovery. Taylor was a strong figure in a capable half-back line, and the forwards were all hard workers, with Hesmondhalgh and Green very thrustful, Hetherington decidedly skilful, and Kelland excelling in ball control and tricky footwork. Best of all, possibly, was McIntyre, who delighted the crowd with his first time passing and shooting. The Bristol eleven had Hughes to thank that their defeat was not by a heavier margin, for he played, literally, the "game of his life." 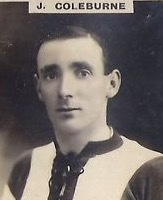