Grecians Overwhelm the Lions and Go top of the league.

The four goals scored by Exeter City against Millwall did not flatter the home side. The Londoners were fairly beaten by a more skilful and thrustful eleven, and seldom looked capable of scoring. Today's victory put the Grecians at the top of the Third Division table; they are, moreover, the only unbeaten side in the section

Glorious September weather, keen and bright, ensured a good attendance at St James's Park today on the occasion of the annual visit of the ever-popular "Lions" from Millwall. The players, who are feeling the effects of playing on hard grounds, would have been better pleased if the ground had had a good soaking during the week, however. Millwall have made very few team changes. Lansdale was secured from Norwich City towards the end of last season, Waterall comes from Notts County, and Sutherland from St Mirren. Travers late of Swindon Town, has not yet shown his best form this season and was not included in the eleven selected for today's match. The backs and halves were all last season's men. The spectators were early arriving, and by 3:15 pm there were fully 5000 present.

The Millwall party had reached the ground at 3 o'clock, and reported no changes in the team that was previously announced. Jack Fort (pictured) received a cordial welcome from his old pals, amongst whom was Billy Smith (pictured)the popular ex-Grecian half back, who sprang a surprise on his former colleagues by announcing his marriage, the wedding have taken place quietly during the week.

The passage overhead of an aeroplane interested the waiting crowd for a minute or so, and just after it had disappeared into the blue the Millwall team came out and Fort, who bought up the rear, received a hearty ovation. Cheers the greeted Dick Pym and his hefty company, and next minute the City skipper had won the toss, and elected to defend the St James's Road goal in the first period, Millwall having to face the sun.

Millwall were aggressive right from the kick-off, a long shot from Dempsey being gathered by Pym. The goalkeeper in the next minute was faced with a more difficult problem, Broad having steered his way between the backs and secured a clear opening. Pym dashed out to meet the shot half way. Exeter then took up the running and Wright tried to bore his way through the middle, but was charged off the ball. A bright piece of play by Appleton and Makin roused the crowd, but Hodge proved the stumbling block. Pym then had to save a header from Sutherland following a corner taken by Waterall, the first of the match. Exeter worked their way down the field again and a bout of clever first time passing enabled Dockray to push the ball smartly across the Millwall goal, but Makin's ensuing shot was wide. The City forwards were in sparkling form, and the crowd was seething with excitement as attack after attack was launched. Wright and Vowles got clean through on one occasion with only Lansdale to beat, but they impeded one another and the ball was scooped over the bar. Lansdale saved from Appleton, and another shot by Wright went over the bar, but after twenty minutes' play Makin dribbled to within twelve yards of the goal and beat Lansdale all ends up with a fine rising shot. Tumultuous cheering greeted the score. For a quarter of an hour Millwall had been to look like novices, but they now faced a momentary look-in, and Broad though awkwardly placed, brought off a fine short, the ball clearing the cross bar by about a yard. Exeter came again with a great dash, and contrary to custom the City's right wing was taking the bigger share in these brilliant raids, for two minutes after Makin's goal Appleton centered from the corner flag with unerring accuracy, and Carrick, jumping high, headed the leather in with a fine effort. Exeter slackened off towards the interval, and Pym has to dash out of his goal to stop Broad for the second time in the match. He also saved a good shot from Waterall, but was powerless to save a header from Sutherland. Luckily the ball flew over the bar.
Half time City 2-0 Millwall.

Seconds after Pym had saved from Broad the ball was at the other end of the field, and Lansdale won appalause for gathering a tricky centre from Appleton with three City forwards following up. Exeter were not to be denied, however, and six minutes after the re-start Wright put them three up with a well directed shot, the move having been engineered by Makin. Two minutes later some keen forward play by the Grecians saw Makin transfer neatly to Vowles, who netted the ball, but the whistle had sounded for offside. The fourth goal, after twenty five minutes play, the ball was headed into a gaping net by Wright, the goalkeeper having advanced too far in a vain attempt to catch Appleton's centre. The City at this stage were simply toying with Millwall, and a whole fusillade of shots was sent in. Lansdale saved "piledrivers" from Makin, Vowles, Mitton, and Wright,a header by Carrick from yet another Appleton centre sailed over the bar, and a vicious looking volley by Vowles went the same way.

It was altogether a glorious victory, and nor many defences in the Third division could have held the Grecians on this form.
It is difficult to single out any individual for special praise in a performance of this nature but Appleton ( pictured) and Carrick deserves mention for the fact that their work showed such an improvement on that of earlier matches. Now that they are top of the League the Grecians must see it to remain there. 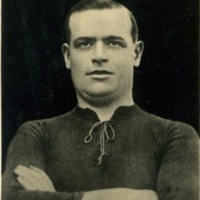 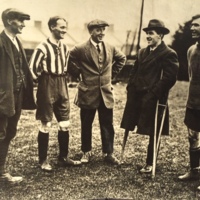 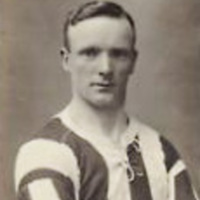