A welcome return to form.

Gillingham who were beaten by the Argyle last week, decided on four changes in their team to face Exeter City at St James's Park this afternoon.
Wigmore was substituted for Baxter at right half, and Roe and Gore, last week's left wing, dropped out. Wood played inside forward instead of centre forward, and, H.Wright, a new forward from West Bromwich came in at outside left. Gilboy led the attack.
The afternoon was fine, and the ground in beautiful condition, not too hard, and with a fine carpet of close cropped grass. There were 7000 spectators, despite Exeter's recent losses.
Wright, who scored a hat-trick for the Reserves last week, was reinstated at centre forward for Exeter City.

Pym beat Branfield with the coin, and elected to hold the Exeter end, and Gilboy set the ball rolling facing brilliant sunshine.
Gillingham won two corners in the opening minute, but neither gave the City defence serious trouble and no shot materialised. Gilboy strove steadfastly to create openings, but every move was met promptly by the City rearguard. Battiste once got past Feebery and tested Pym with a grounder, and the Exeter goalkeeper also fielded a long drive by Needham. The City were taking a long time in getting a grip of the game, and after six minutes play Battiste cleverly eluded Feebery and swept across a perfect centre which tempted Pym out. Wood, however, met the ball with his head, and Gillingham were a goal to the good.
At last Exeter woke up, and Makin and Appleton won an opening. The winger went on with only Barnfield to beat, but lifted the ball over tha bar. Wright gave Dockray an opportunity of putting in one of his high power centres. Makin headed the ball towards goal, but Branfield was right on the spot and gathered it with ease. Pretty combination on the left saw Vowles swing the ball across goal, but it was a shade too high for waiting Exeter forwards. The Grecians continued to struggle for the equaliser, a sudden shot from Vowles scraping the whitewash off the top of the crossbar.
Vowlles drove another one of his left foot "specials" against a post with such force it shook a cloud of lime dust off the upright, and Branfield appeared startled by the power of the shot. Yet another beautiful drive from Vowles nearly took Branfield by surprise, but at the last moment the goalkeeper punched the ball against an upright, whence it rebounded into play.
It wanted but one minute to the interval when City at last scored. Dockray got away down the wing at express speed, and coming in towards goal beat man after man in a tricky dribble till five yards from the line he touched the ball to Vowles who rammed the leather into the net without hesitation.
Half time 1-1.

Ten minutes from the finish Dockray swung the ball across, and although it was too high for Vowles and Wright, Appleton came in from the right and met the centre first time. The leather hustled into the far corner of the rigging with Barnfield helpless.
Exeter were still pressing when the final whistle sounded, and Carrick, with a header, and Mitton, with a right footer, were out of luck.

Western league match at Bristol. Walton opened well and Dando, in the first attack was just wide with a good shot. McIntyre made a fine run for the City, and from his centre Brayshaw headed over the bar. Bullock scored for Welton from a free kick, but ten minutes before the interval Hesmondhalgh equalised, receiving his opportunity through Smith mis-kicking.
Exeter pressed on the re-start, and a centre by Lincoln from the touch line was met by Hetherington, but Gilbertson saved at the expense of a corner. Bullock (Welton Rovers) was injured, and left the field. Exeter strove hard for the winning goal, but were kept out through the efforts of Gilbertson, the home keeper.
Final Score 1-1. 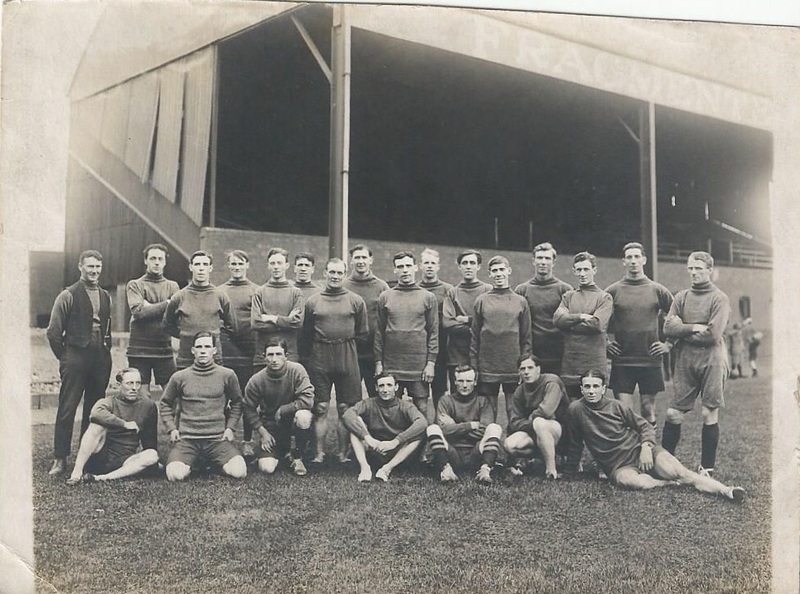