Crystal Palace under a cloud. Selhurst ground closed by the F.A

Crystal Palace despite their exalted position in the Third Division League table, are under a cloud at the moment, an F.A Commission having ordered the Selhurst ground to be closed for fortnight as from Monday next, in consequence of the disorderly conduct of some of their spectators at the close of the Palace and Southend match on November 3rd, and the insufficient effort made for the protection of the referee and visiting players by the Palace club.
Speculation is therefore rife as to the venue of next Saturday's return encounter, the Commission having decided that the match must not take place within a radius of 10 miles of the Palace ground. The general expectation was that the matter would be settled this afternoon, when the visiting directors and players reached St Jame's Park.
It will be recalled that when City visited Crystal Palace a year ago the match ended prematurely in darkness, and there was an unruly scene when the players left the field.

Hesmondhalgh did not shine when promoted to the first team last week, therefore Wright was restored at Centre-Forward. Dull but dry weather favoured the match, and the ground was in good condition. The teams came out at 2:55pm, when there were more than 5000 spectators in attendance, but people were pouring in fast, and it was apparent that the total would be much bigger in another quarter of an hour. Pym won the toss, and elected to defend the far goal from the outset.

The match opened quietly, but keen play by Wright soon produced a chance for Appleton, but the winger slammed the ball across so fast that none of the inside forwards could reach it.
Exeter again advanced smartly, and Appleton forced a corner off Rhodes, which was cleared in brilliant style by Alderson. End to end play followed and both defences showed up well. An exciting bit of play was seen when Makin drew the Palace defence out of position with a clever dribble, enabling Wright to send Appleton away with plenty of room to spare. The winger centred too hard, and Alderson diverted the ball before Vowles could get a head to it.

Coleburne was twice penalised for fouls just outside the Exeter penalty area, and free kicks, taken along the ground by the Crystal Palace Feebury in the same way the Exeter's Feebery is wont to do, we're both cleared by the last named. The Palace forwards were applauded for some delightful football, the passes from man to man being perfectly timed and placed. Conner was as slippery as an eel, and wonderfully resourceful, and several times he had the City defence guessing as to his next move. Pym gathered one very neat header from him at close quarters, and the City skipper would have a very anxious time to it if the shots of Menlove and Conner had been better directed.

Conner caused a sensation by rounding Coleburne cleverly, but Pym scented the danger, and in a twinkling was a dozen yards from his charge, picking the ball literally off the centre-forward's feet. Whibley, making a swift dash upfield, was charged off the ball and crashed into the fence behind the goal-line, and was laid out temporarily.


More bad luck befell Palace at the start of the second half, Menlove twisting his knee and having to retire, while five minutes from the end Rhodes also injured his knee.


City v Palace return match.
Subject to the consent of the Tottenham Hotspur club being obtained, the return match between Exeter City and Crystal Palace will be played at the White Hart Lane ground, where the Reserves of the Spurs and Crystal Palace were due to meet in a Combination match. White Hart Lane is outside the ten mile radius from the Selhurst Road ground.

Exeter City Reserves were held to a draw at Cardiff, where they played the Corinthians in a Western League match. 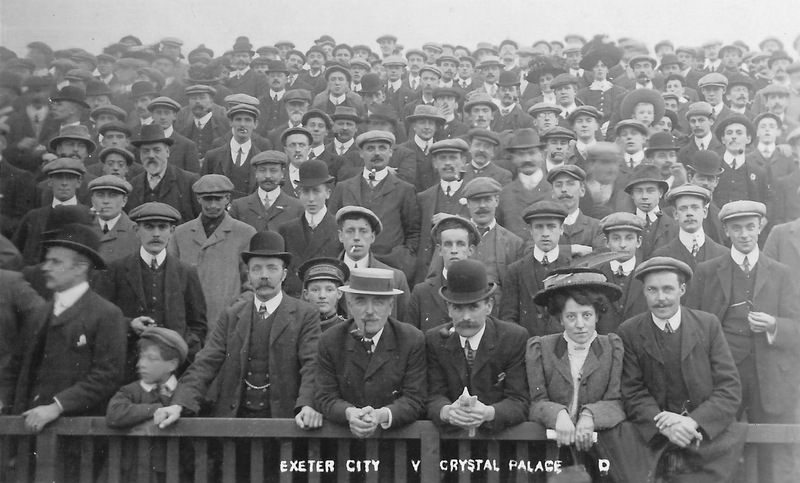