Exeter' finest match of the season.

"It's an ill wind that blows nobody any good,"reflected the supporters of the Saints, as they made their way to the Dell this afternoon, to see the match between Palace and Exeter City. The novelty of the fixture appealed strongly to the liking of the Soccer following in the big Hampshire port, and the magnetic power of the match was extraordinarily great in view of the fact that Palace are running Southampton very close in the matter of leadership of the Third League.

Everyone in Southampton wanted to see how the Crystal Palace stars compare with their own favourites, and so weigh up what the chances are likely to be for promotion at the end of the season. Under ordinary circumstances the Glaziers would not have been on view at the Dell until Easter, so whatever the feelings of the club directly concerned may be in regard to the change of venue from Croydon to Southampton, the "Saints"supporters regarded the occurrence as a rare stroke of good fortune.

The fixture was unique in that the teams were to play before a strictly neutral crowd, although it was expected that many people from London would be in attendance, Exeter have always been very popular at Sothampton, and were assured of a friendly welcome.

In the abscence of Charlie Pratt, who had to run out for the Reserves, Lakin accompanied the City team as trainer. Southampton was reached with nearly an hour to spare. After a bracing motor drive from Salisbury the team were in the best of spirits, and the weather was good and the ground in excellent condition, a tip-top game was anticipated.

That the fixture was a popular one was early evident, for the crowd was streaming in fast half an hour before kick-off, and by the time the players took the field there were 12000 spectators.
The Palace had Smith for Menlove, who was rested on account of the injury he sustained at Exeter last week. Dick Pym must have broken all previous attendance records, for he was making his 181st consecutive apperance with Exeter City's League team today, not having missed a single match since he joined the team in 1912.

Judging from the ovation accorded to the players by the crowd, both teams must have felt at home. Smith won the toss, but this carried no advantage, the sky having now become overcast. A great deal roar of cheering arose as Exeter made fine headway on the right wing direct from the kick-off. Appleton was hemmed in but passed to Dockray, but McCracken checked the sprightly little winger. In the next minute Conner broke through at speed, and Coleburne had to tap the ball over the goal-line. Whibley placed the corner kick just under the crossbar and Pym flicked it aside as Smith crashed into the netting in a brave endeavour to force the leather home.

Vowles drove half way up the field to Dockray, but the ball went into touch, and in an instant the Palace left wing swept down the field and this time Feebery had to concede a corner. It was cleared weakly by Carrick, and another corner resulted. Pym saved smartly, but was returned, and Storey shot through a tangle of players for the opening goal five minutes from the start.

Exeter made the play in very brisk style in the next minute or two, and Dockray was much too lively for the opposition. It was after one very spirited burst by the light-footed Carlisle man that Vowles rammed a thundering shot goalwards, with Alderson beaten all ends up, but Feebury had jumped into the goalmouth and booted the ball clear as it was crossing the line.

Alderson next made a sensational save from Vowles, jumping up and turning the ball over the crossbar. At the City end Pym saved twice from the Palace forwards, then Storey headed a yard wide of the gaping goal.
Play had been in progress for 20 minutes when Feebery again conceded a corner, and Smith headed a second goal for the Palace.

Exeter retaliated with rare zest, and Dockray created a lovely opening for Vowles. The ex-solider took his time,many with all the coolness imaginable shot magnificently along the carpet. This time Feebury was not in the way and Alderson scarcely saw the ball as it sped into the bottom of the net from Vowles's trusty left foot.

Now Exeter strove hard for the equaliser, and the crowd cheered exultantly as Vowles carried on along the wing and swept the ball across to Makin, who in the goal area looked all over a scorer. The ball was punched out by Alderson and Makin tried a second shot but sent wide. Vowles who was in brilliant form , headed over the crossbar from another of Dockray's centres. Another corner was won by City's irrepressible left winger and this time Carrick tried a header, which hit Rhodes on the shoulder and was cleared. Dockray rattled the crossbar and Vowles crashed another powerful drive over the the top. The crowd were thrilled by the exploits of Vowles, who was playing the game of his life. He seemed everywhere at once, in fact, one minute creating chances for the forwards, and the firing in shots and headers at the Crystal Palace goal, and the next minute back with the defence.

Appleton, receiving from Makin, all but scored after a clever dribble, then Wright headed just wide. The Palace, through close passing, transferred play to the City end, and Pym saved from Whibley and was tripped by Conner. From the free-kick Makin sent Vowles through but this time he was hustled off the ball, and Rhodes back passed to Alderson, who picked up and cleared. The game continued to be a succession of thrills and spills, with the crowd in full cry all the time. Appleton gave Alderson a hot one to save just on the interval.

It had been a glorious first half, with Exeter playing very fine football, especially forward, where Vowles and Wright, were on the very top of their form. With ordinary luck the City would have been a goal up instead of a goal down when the teams crossed over. Rain was now falling steadily, but the crowd, now numbering in excess of 13000, settle down to expectation of big doings in the second period.

Pym saved from Feebury following a corner, taken by Bateman. Then the Grecians came away with great dash and Appleton applied the finishing touch with a hefty shot which appeared to enter the goal, but Alderson picked the ball up outside the net, and after an inspection the referee refuted Exeter's claim. A minute later Appleton beat Alderson with a scorching low shot, but the ball travelled inches wide of the post.

The City should have equalised when their right wing made a sharp raid, but Makin shot instead of tapping the ball across to Vowles, and missed. Then Alderson came outside the penalty area to clear from Vowles and handled the ball illegally. Dockray took the free-kick and Makin headed into the goal. Alderson scooped the ball out quickly, and Mr Austin disallowed the sting appeal of Exeter for a goal, the second to be refused.

Carrick dribbled through but Alderson saved his shot. Pym then tipped away a header from Bateman,mans saved from Smith. Storey with a grand dribble, cleverly beat four men but spoiled the move by firing wide of the objective. Vowles was not so prominent in this half, but Carrick had toiled away untiringly in the centre of the field and was covered in mud from heat to foot. He was a great favourite with the crowd. The final fling came from Dockray, who struck the crossbar with a beautiful shot.

It was a glorious game, Exeter's finest of the season in fact, and had their shooting boots been better they would have one with ease.

The Corinthians club of Cardiff who had played FC Barcelona in 1912, were the next team to be encountered in the return Western League fixture on Saturday 27th, at St James's Park, whilst the first team were playing at Southampton.

A return for Charlie Pratt and Jimmy Rigby.

Charlie Pratt, the old City first eleven centre-half, occupied the centre forward berth, and another old favourite in the person of Jimmy Rigby, who was last season's captain, returned to active service following an operation and a long convalescence.
Pratt and Rigby received a warm reception from the crowd as the teams entered the field. Rigby, who captained the Grecians, was successful in the toss of the coin.

The Welshmen set the ball in motion, but it was soon captured by Lincoln, who swerved past Loney and shot, the final attempt being wide of the mark. The Reserves' forward line played well together, and Lincoln again beat Loney and centered across, but Gill punched clear.

McInytre next paced Parr for possession and won a corner, which he took himself. The centre landed just right for Taylor, who put the ball neatly into the top of the net with a header.

Gill was playing an excellent game in goal for the Welshmen, but he knew little about a header from Pratt which struck the bar. Pollard robbed Thomas (A) and fed McIntyre, who ran through and when ten yards from goal unleashed a shot without steadying himself, the ball travelling into the net just below the crossbar.

On the resumption Exeter quickly took up the running again, and in one determined attack Brayshaw found the net with a capital drive.

Betteridge was injured but resumed. Pratt headed just outside, and Brayshaw put in a hefty shot that Gill saved in style.

Brayshaw next dribbled past three or four players, and with the Cardiff defence in a tangle Parr, attempting to kick the ball over the goal line for a corner, deposited instead into the back of his own net with a hard drive.

The inclusion of Pratt and Rigby made a world of difference to the play of the Reserves, who thoroughly deserved their victory, the final score being 4-nil. 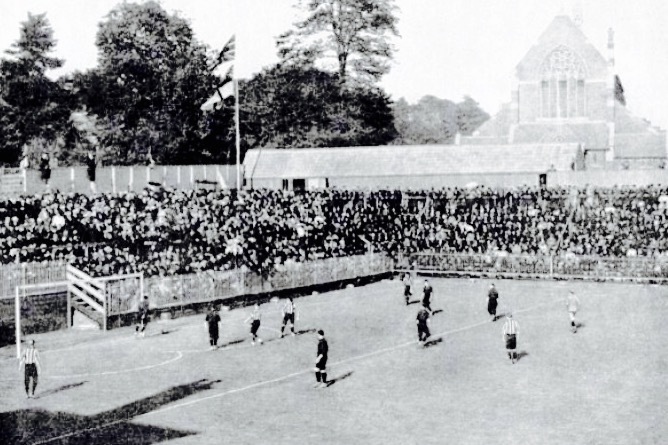