It is a long time since Exeter City had a wet afternoon for a first team home match, and they have been very few and far between. Today, although the north wind was very boisterous it was  fine and bright, and the turf was recovering splendidly from the heavy rain and storms of the past few days.

The Northampton team travelled through to Exeter yesterday and stayed overnight at the Bude Hotel.

The effect of the advancement of the kick off to 2:45 o'clock was seen in the sparse attendance a quarter of an hour beforehand, when not more than 1500 people were present, those on the cheap bank congregated mostly about the half-way line and behind the far goal, the two favourite spots. The crowd had increased to 5000 when the teams came out, and Hewison having got the better of Pym in the matter of the toss, set the City facing a strong sun in the first half.

Wright had the first kick of the new ball, and the City, just missed creating a sensation in the opening few seconds when Makin ran through and centred to Wright, whose shot was punched out by Thorpe. End to end play followed, and it was evident that ball control was going to be difficult in the high wind. After Feebery had cleared his lines with a huge kick, Wright fed Appleton with a nice pass, but the winger drove high over the goal. Thorpe saved twice in quick succession from Dockray and Appleton and again from Dockray. Northampton carried play to the other end, where Pym came out to save but lost the ball to Hewison, whose shot was carried yards wide by the capricious wind.
After 17 minutes' play Appleton again shone with clever work on the wing. His pass to Makin was rolled across to  Vowles, who promptly put the ball into the Northampton net.
Crawshaw neatly robbed Hewison and sent Appleton through only for the winger to be fouled by Jobey. Feebery's free-kick was fisted out by Thorpe, but Dockray got the ball and passed inside to Vowles, whose shot was straight but too high.
Close to the interval a shot by Makin struck the upright, and Wright netted from the rebound.

The first incident of note was an infringement by Carrick just outside the penalty area, Pym doing well to tip over Hewison's free-kick over the bar.

Play became less interesting for a while owing to a succession of stoppages for minor infringements, and Grendon was admonished by the referee for some witticism made at the official's expense.
Thirteen minutes from time Wright received the ball 30 yards from the opposing goal. Heading the ball over MacKechnie, he went on at good speed with a clear field. Thorpe rushed out in an attempt to stop the City leader, but was hopelessly beaten by Wright's shot, taken at precisely the correct moment, and the ball flew into the rigging for Exeter's third goal. More thrills followed in quick succession at both ends, and right on time Dockray obtained the ball at the half-way, and sprinting ahead outpaced the entire opposition, netting the ball with a beautiful swerving shot.

At Eastville, for Western League points. Rigby won the toss and Exeter played with the advantage of a  stiff breeze, Pratt and Lincoln getting near the mark with curling shots.
Chance forced a corner for the Rovers, but the flag-kick was cleared without Charles having to touch the ball. The Rovers now improved, Vaughan and Norton going near with excellent shots.
Exeter played well, but their attempts at shooting were feeble apart from one in the second half by Pratt, which Stansfield just managed to save. 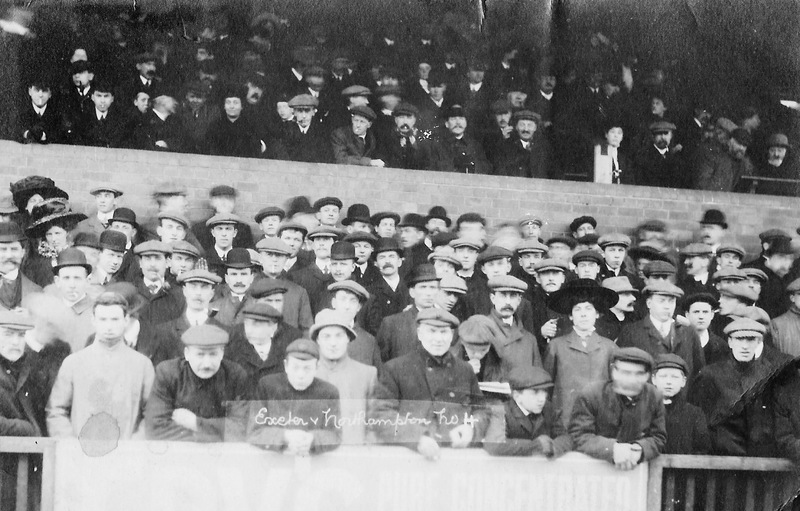