Having won a convincing victory over the Cobblers at St James's Park last Saturday, Exeter City made the long journey to the boot and shoe centre to play the return game on the County Ground this afternoon. Northampton went under rather badly last week, but as they have not lost a match since the middle of September there was an optimistic feeling that they would get their revenge today.

It was a beautiful morning at Northampton, but snow was falling as the game commenced. There were 6000 spectators. Pym won the toss and Lockett kicked off.

Crawshaw immediately checked Thomas, and made a forward pass to Appleton, who tricked Tomkins but then wasted his centre. Exeter followed up with another clever attack, Dockray, Makin and Vowles combining beautifully, but the shot which was finally delivered by Vowles struck the side netting. Northampton replied with a run on the left in which Freeman beat Coleburne, but Feebery came across and cleared. Lockett was then tackled by Green, who began another Exeter move with Dockray on the ball. The Carlisle man went off at full speed and passed to Wright, who beat Thorpe with a nice shot. This came after five minutes play.
Subsquently the City forwards played with great dash, and a chance came the way of Makin. He controlled the ball with skill, then drove in a full-bodied shot which Thorpe jumped to and put over the bar. The corner was unproductive.

Another corner, conceded by Hewison was cleared, and the play remained in midfield for some minutes. Then the Cobblers attacked, and after some muddling had taken place near goal the ball went to Tomkins, who shot. Pym would have saved the original shot, but the leather hit Thomas and was diverted into the net from the opposite direction. Northampton thus equalised with a very lucky goal, the match then being fifteen minutes old.

Fifteen before the interval some sensational play was seen, and in a burst of rapid scoring the City got two goals in the space of two minutes. Clever footwork by Vowles enabled him to beat the defence, and his pass to Wright was converted by the centre-forward with a great shot from about 25 yards.
Two minutes later Dockray went through on his own, and cutting in towards goal was cut down by Thorpe. Both players fell as Dockray shot, and the ball trickled over the goal line and into the net for City's third goal.
Freeman followed with a splendid attempt for Northampton, his shot striking the crossbar. The City returned to the attack with gusto, and Thorpe made an amazing clearance from Vowles. As the interval approached the City were still in ascendancy, and a lusty drive by Wrigt was punched out by Thorpe.

It was snowing heavily when the game was resumed, and the City were quickly aggressive on the right wing. Appleton beat Hewison and centred to Makin, whose shot was gathered by Thorpe just as Wright was boring in to apply the finishing touch. Pym saved a free-kick taken by Hewison, but Northampton maintained a strong attack and two corners were coincided by Feebery. By this time the ground had become treacherous, and slips were frequent.
Dockray made another splendid run, and tricking Grendon, he got the ball across beautifully, but Hewison got the better of Wrightand cleared his lines. After 30 minutes Pease sent in a long shot, which apparently would have hit the crossbar, but Pym, in attempting to save, pulled the down into his own goal. Two minutes later Whitworth dribbled through, and with the City backs failing to tackle him he went on and scored a third goal for the Cobblers and brought the scores level.
The last few minutes saw some desperate football from both sides, but the defences prevailed.

Notes on the Game.

It was a truly remarkable contest, and wonderful finish. The recovery of Northampton was amazing, after being two goals behind at the half-way stage. On a slippery field with snow falling they kept their feet better than Exeter in the second half, and they also derived some benefit from changing their attack during this half, with Whitworth in the centre and Lockett inside left.
As a team, however, the City were infinitely superior. Pym was distinctly unfortunate in losing the second goal, while the backs were to blame for losing the third. The forwards and half-backs played really clever football throughout, and Northampton were lucky to share the spoils.

Exeter City Reserves were at home this afternoon to Yeovil and Petters United in a Western League match, In fine but very cold weather. The visiting side included Ben Potter and Percy Nutland, both ex-Grecians.
There were about 1000 spectators in the ground when Hayward kicked off for Yeovil.

Ten minutes before the interval Hetherington tapped the leather into the net after Gregory had saved at full length from a shot by Hesmondhalgh, and twenty minutes after the change of ends a free-kick by McIntyre was converted by Hesmondhalgh. 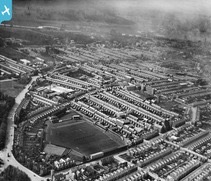