Thr Grecians were very hopeful this morning of commencing the New Year with their first away  victory, but there was disguising the fact they were up against a very difficult problem. The Shrimpers have improved recently, and were undeafted throughout the month of December. They took three points from Newport County in the Christmas matches.
Exeter were at full strength, but Southend had to find a deputy for Fairclough, who is under suspension. He has scored most of their goals this season.

The weather was wet and wretched, a drizzling rain falling, and the ground being naturally treacherous. Southend won the toss, and Shields kicked off before 3000 spectators.
The City immediately attacked on the right, Makin sending a nice pass out to Appleton, who tricked Henderson beautifully but made a poor attempt with the subsequent centre.
Newton cleared, but Carrick checked the Southend advance, and passed to Dockray, who was quick to make progress and centre, but Whalley headed the ball away before Shields could get to it. The Southend forwards retaliated with some clever combined play, and Coleburne did exceptionally well to charge down a fast centre by Dorsett, the ball bouncing behind for a corner. Pym jumped above the Southend forwards to gather the flag-kick, then saved from Walters with the hoe forwards rushing at him.
Southend's next move was along the right wing, Ford and Myers being seen to advantage with clever combined play. Ford sent the ball into Walters, who shot with all his force, hard and true, but Pym was the master. And again the Exeter skipper was hard pressed when Dorsett dropped a beautiful centre, yet contrived to protect his charge as only he can do.

Penalty missed.
An unusual incident took place five minutes before the interval. A shot had been sent in by Walters, which Pym caught and cleared, but at the same moment Coleburne brought down Nuttall, the referee promptly gave Southend a penalty. Whalley took the kick, but his shot went yards wide. Shields failed narrowly to score, his header from Makin's centre passing the wrong side of the upright.

The rain had not ceased when the game was resumed after the interval, but the crowd had increased to about 4000. Myers was unlucky when he dropped the ball right in the goalmouth, but it stuck in the mud and Coleburne was able to kick clear.

Comments.
The City, after dividing the spoils with Argyle, effected a further draw at Southend today, but this was only possible through the marvellous goalkeeping of Pym, and the resolute tackling of the remainder of the defence. The whole rearguard performed splendidly. The display of the forwards was patchy. It was excellent in the open, but much too loose near goal. The shooting was poor.

Welton Rovers were completely outplayed by the City Reserves in the Western League match at Exeter, played in pouring rain. It was a picnic for the Reserves, who won by eight goals to one, and in the second half Charles had not a single shot to save. 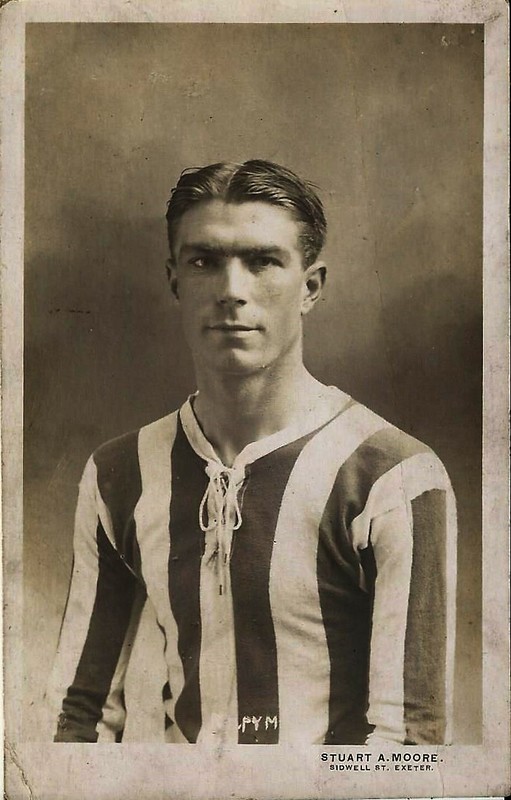