Exeter City made four changes from the side beaten at Watford last week. Sergeant Waller, of the Royal Garrison Artillery (RGA), took over the goalkeeper's position, vice Pym, whose absence from the team was a source of general regret. It transpired that a broken collar-bone was the outcome of some rough treatment by two of the Watford forwards in the cup-tie.

Dick Pym had not missed a match of any description for Exeter's first eleven since March 23rd, 1912, when at the age of 18 years, and an amateur, he made his first appearance in a Southern League game at St James's Park against Stoke.

To Sgt. Waller, therefore, falls the distinction of being the first goalkeeper other than "Pincher" himself to guard the City's net for close on nine years. Even Loram, who had played against Brazil, and, who at one time in his career was regarded by some to be almost as good as Pym, could never get a first team game, such as been Dick's consistency and freedom from injury, until now.

It was a glorious afternoon, the sun being veiled by light clouds. The ground appeared in surprisingly good condition in view of the recent weather. There were 5000 present when Alf Green led out the City team at 2:40 pm., and both Exeter and Brighton received a cordial ovation.
Brighton were the first to become dangerous, but Doran handled when it appeared as if he was about to turn a pass from Longstaff into the net, and the ball went behind.
Then Rigby checked March very neatly, and McIntyre was loudly cheered as he passed two defenders in dashing style, and finished up with a sharp burst and shot which had Hayes beaten, but the ball struck the far post and rebounded into play.

A Smart Shot.
Play had been in progress for 7 minutes when Exeter scored. From midfield Shields beat the Brighton defence with a long pass Dockray, who raced pass Bentley for possession, and dribbling on, found the goal covered by Hayes. Dockray passed across the goalmouth and outwards to Shields, who netted with a smart shot.
Doran, the Irish International, was opening up the game in the manner born, but was being shadowed so well by Carrick that none of his moves, clever though they were, troubled the City defence.
Green placed the ball perfectly for Shields to attempt to break through, but Bentley nipped in and passed back to Hayes, for the goalkeeper to clear. A shot from McIntyre hit the side netting.
Feebery headed a fine ball from March, with Doran in waiting and Carrick won applause for a quick recovery in midfield against Doran. Rodgerson cam near to scoring for Brighton a minute before half-time, but his shot flew over the bar.

Second half
Rodgerson ballooned the ball over the bar when almost on the goal-line, and at the other end Hayes gathered a nice header from Shields. Dockray and Shields went clean through 15 minutes before the finish, but the centre-forward shot a yard outside the post when a goal appeared absolutely certain.

Exeter gave a vastly improved display in all departments. The best player on the field was Carrick, who had the measure of Doran all through, and stuck to the Irish International in a way that must have been embarrassing to him. Rigby played a much stronger game and distributed the ball with judgement. 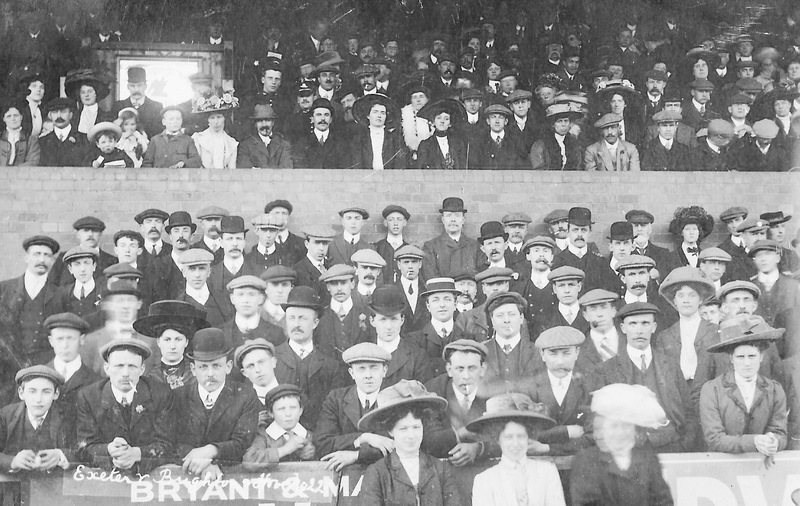