Exeter City made several changes for a week ago, Crawshaw and Appleton resuming in their normal positions and Brayshaw coming in at inside-left. Pym, of course, was still an absentee, and Waller was again in goal.

A slight drizzle commenced just before the start, but there was every prospect of a good attendance, and about 6000 were in the ground when the players came out.
Bollington opened out the game for Brighton with a long pass to Longstaff, but the winger failed to control the ball, and it went over the goal-line. March then made a nice run on the left and put across a perfect centre, but Waller dashed out and cleared.
The City were some time in settling down, but at last Makin and Appleton got on the right, and the ball was transferred to Dockray. The Carlisle man tricked Bentley with a bit of fancy dribbling, and centred, but the extra height of Bollington, who is over six feet tall, enabled him to head clear before Shields could assert himself.

Doran in the Limelight.
Green, attempting to get the ball through to Dockray, was fouled by Bollington, and from the free-kick, lofted into the goal-mouth by Feebery, Shields just failed with an excellent header. A quick rush by Doran to the other end placed Feebery at a disadvantage, and a corner resulted. However, Feebery cleared the flag kick. A long pass to Doran from Coomber saw the Irishmen off at a fast gallop, and a goal appeared certain until Waller came out, taking the ball from Doran before he could shoot.
Doran, leading his line with great football skill and plenty of dash and energy, was more in the limelight than at Exeter last week, and in fact the whole Brighton forward line was seen as an effective combination.
The Seasiders made another determined attack, in which Doran figured prominently, but Feebery intervened. Woodhouse passed to Rodgerson, who put a long shot over the bar, and in a rare attack by the City the ball, centred by Appleton, struck Rutherford and went over the line for a corner, from which Carrick headed wide.
Half Time 0-0.

Second Half
In the Second half each side obtained a goal, Doran netting for Brighton from the penalty spot, and Makin for Exeter City.

A crowd of about 2000 assembled this week at St James's Park this afternoon to watch the return Western League engagement between the City Reserves and Abertillery. The visitors' pale green and white jerseys bore a close resemblance to the Grecians' original colours of their amateur and Southern League days.

The visitors won the toss and Exeter defended the St Jame's end in the first period. For 5 minutes play was located around the Abertillery goal, but the Welsh team's defenders covered one another very capably, and scoring chances were few.
Deacon, the St Luke's College student, was injured when Brooks barged into him, but continued after treatment.
Half Time 0-0.

The second half had been in progress for just 10 minutes when Lincoln won his way clear of the opposition, and shot. Fox muffed his clearance and fell, leaving Hetherington an open goal in which to tap in the ball, and the inside right made no mistake.
Banks equalised five minutes from time. deacon was outstanding in the Exeter team, his steadiness and accurate placing of the ball being quite a feature. 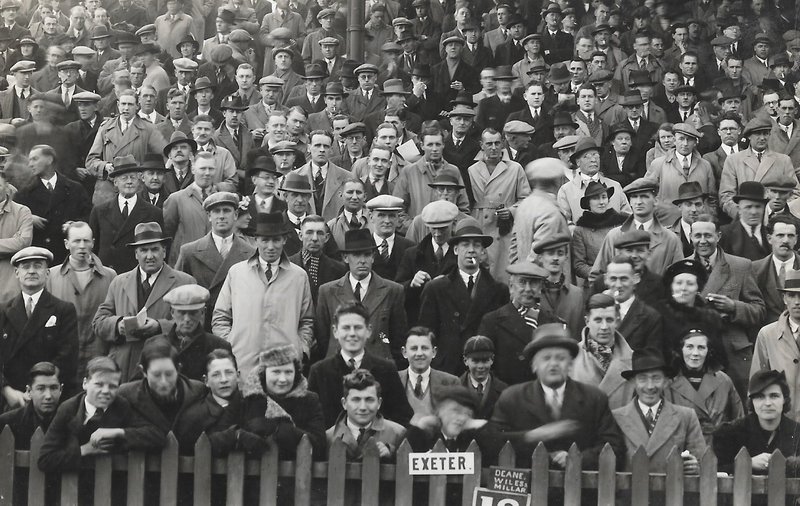