First of the Season

Exeter City's defence was brilliant, and the Bristol forwards' opportunities were strictly limited. A crowd of nearly ten thousand spectators sweltered in the heat wave at St James's Park this afternoon, where Exeter looked to the four new forwards and the seven players included from last year's combination to make a happy opening to the new season.

By dint of very praiseworthy all-in play the Grecians took the lead nicely before the interval, and a second half goal half an hour after the change of ends settled the destination of the points. This was a very welcome result, and it should give the

team timely encouragement for their difficult away matches next week. The play of Miller and Childs were immensely fine, as was the way Clarke amazed his rivals by his super-speed on the ball. For the rest the City defenders and halves can look back with a great deal of dstisfaction on a game which proved them to be every whit as good a combination as last season. The new Exeter attack improved as the game progressed, so that from being a somewhat disappointing line the men impressed as a very workmanlike set of players, with Connaboy a particularly cool and clever inside right. Welsby scored the first goal after 33 minutes by bundling Pickett and the ball into the net with a hefty shoulder charge. The second goal resulted from a fierce rising shot by Poulter from close in.

Southern League match at Penydarren Park. Merthyr went ahead after five minutes, Samuels scoring direct from a free kick. The Exeter defence was weakened by an injury to McJennett, who had to retire from the field when the game was twenty minutes old. Kennedy scored for the City, and Lowry from Blandford's pass fired over the Exeter goal from almost under the crossbar. Lowry regained the lead for Merthyr early in the second half, and although the ten Exeter men fought with courage and determination to the end they were inclined to be erratic near goal, and Whitlow wasted two good scoring chances in the closing stages. Kennedy was Exeter's best forward.
The City team was:- Ince; McJennett and Hughes; Ditchburn, Angus, and Robinson; J.Gumm, Kennedy, Whitlow, Higgins, and Courtney. 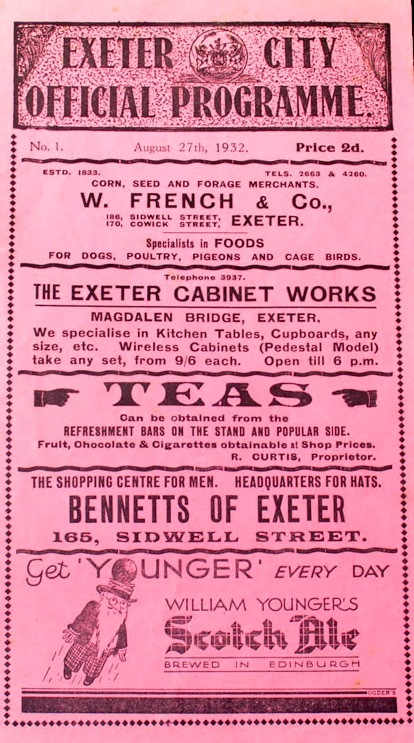