ONLY ONE POINT BEHIND

Twelve months ago, almost to the day, when the Grecians visited Brentford in a match for Southern Section points, the Bees were on top of the League table with a lead of three points over their nearest rivals, Crystal Palace. Fulham were third and Exeter City fourth. The City drew that match, 2 - 2, Houghton scoring both goals for the team from Devon. Today Brentford are on top of the League again, and again there are three points between them and their nearest rivals, Exeter City. And this time the Grecians appeared in Town to challenge the leaders in the role of runners-up. Brentford, although without Holliday and Bain, were as confident as any club can afford to be that they would harvest the points.

Miller lost the toss and Whitlow set the ball in motion facing a light breeze. Brentford, with a reserve centre-half and centre forward, made a gallant attempt in the first half to overcome
their dangerous and close promotion rivals at Griffin Park, but Exeter City carried "too many guns" in the second half, and so, for the first time this season Brentford were defeated on their own ground. Brentford will no doubt contend that they had a perfectly good goal, scored by Allen in the twelfth minute, disallowed on the grounds of offside, but there is little doubt that moment a before Allen received the ball he was in an offside position. Brentford need not be disheartened by this reverse, because they were opposed to the finest combination in the Third Division.

Once the Grecians had survived a gruelling first half the whole team settled down to give the best exhibition of football seen on the Griffin Park ground this season. With Gray and Miller in unbeatable form at full-back, with Childs a commanding figure in the centre of the field, and with Houghton displaying all his artistry and delicate ball control in brilliant attacking moves, Brentford were for once found wanting. Yet it was a mistake by Baker seven minutes after the start of the second half that gave the City their chance, and seeing that the opportunity fell to Houghton there was little if any hope of Brentford stopping the goal being scored. Scott of Exeter beat Hodge on the goal-line and put across a difficult centre. Baker jumped and punched the ball but did not connect cleanly. Houghton, ideally placed, calmly headed the ball over Baker's head into the net, while the goalkeeper essayed a frantic but unsuccessful attempt to scramble back and save his charge. And from that blow Brentford never recovered. The more dash and scurry they put into their work the less effective they became. Later in the game Allen had one chance that should not have been missed, but he was over anxious and that was his undoing. Exeter got their second goal in the last minute of the game. Kennedy crashed a shot against the cross-bar and from the rebound the ball was driven into the net by Whitlow with unerring accuracy. This was a great game and a wonderful triumph for the Grecians. No match in which the City have played in recent seasons could have surpassed this contest for intensity of endeavour. It was indeed a battle of the giants.

Brentford in the first half had some inspired spells in attack. They were always brilliant in defence, Hodge being outstanding in this department. Exeter started coolly and cleverly, and they never relaxed from the high standard they set themselves, and they showed the London supporters a thing or two. The match will live long in the memories of those who saw it. It was one of the most outstanding triumphs in the entire history of the Exeter City Football Club.

Time was when St Austell were regular visitors to St. James's Park, Exeter, in competitive football. That was in pre-war days when the Cornish side, like Exeter City Reserves, were members of the Plymouth and District League. This afternoon St Austell appeared in a "friendly" against the City Reserves, and were beaten by four goals to three. 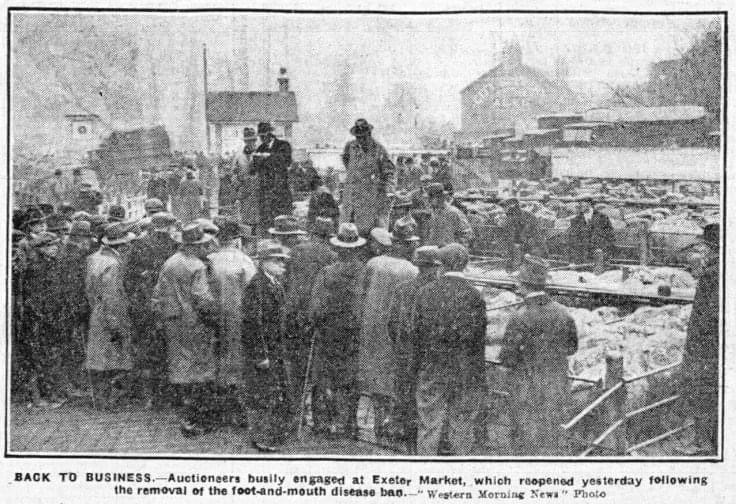