On 28 January 1933, Exeter City smashed local rivals Torquay United with a record 5-0 win, thanks largely to the latest in a series of hat-tricks from the Grecian’s deadly centre-forward, Fred Whitlow.

On a freezing day, when frosty pitches could well contribute to shock results, everything went according to plan for City as they moved to the top of the Division Three South with 36 points from 25 matches.

According to reports of the match, the scoreline did not even flatter City as they were far superior in terms of ‘pace, craft and teamwork’. In comparison Torquay played ‘scrappy football’ and had it not been for the heroics of Percy Maggs in goal, things would have been far worse for the visitors.

Right from the kick-off City went about pressing the Gull’s backline, and it took Whitlow just eight minutes to find the first goal when he responded quickest to Harry Houghton’s header off the bar to scramble the ball over the line.

Whitlow then had a share in the second goal, when Houghton nodded his lobbed pass into the path of Higgins, who raced onto the ball and smashed the ball in off of the post.

In the 29th minute Whitlow again went through on goal, but his powerful effort was parried out of the box by Maggs, only as far as Kennedy, who ‘thrilled the crowd’ with a rising shot from outside the box that flew into the net to make it 3-0.

Four minutes later Whitlow brought the lively ball under control and shot with great force, hitting the net just inside the crossbar, so that the ball rebounded to the turf just inside the line, and then bounced back out onto the pitch.

In the second half City controlled the game, and slowed the pace of the match, but still found numerous chance to add to the score line. The best of these chances fell to Whitlow in the 58th minute when he rounded off the excellent work of Houghton by side-stepping Maggs and shooting home to make it 5-0 and bag his hat-trick.

The treble was the sixth time that season that he had grabbed a hat-trick, and in doing so on this occasion he overtook Fred Dent’s scoring record of 25 league goals in a season.

In all Whitlow would go on to score 33 league goals that season, which is a record that stands at the club to this day, and all the more remarkable given that he didn’t play until the 8th game of the campaign.

Man of the match: Fred Whitlow

After Risdon and Hurst had narrowly missed scoring for the City the United opened their account after half an hour in rather a lucky manner. Davis got well away and rounded Hughes, the ball landing in front of Ince. Two Exeter defenders were on the spot, and whether the ball, going through, went into the net off one of them, whether Ince turned it in, or whether Owens did, it was not possible to say. In the second half Davis and Mock scored goals for Torquay, who won as stated. 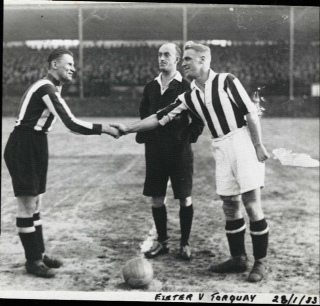