The much travelled player, especially at non-league level, began his career with Basingstoke Town where he netted 55 goals in 92 appearances between 2001 and 2004, attracting interest from Queens Park Rangers, Southend United, Reading and Luton Town.

He then moved to Stevenage Borough, with a loan spell Gravesend and Northfleet and Eastleigh respectively. McAllister signed for Woking in the summer of 2005, scoring 16 goals in the 2005/06 season and 18 goals in 2006/07.

McAllister signed for Grays Athletic in May 2007, and after a ten-game loan spell at Rushden & Diamonds, he signed permanently for Oxford United until the end of the season.

Exeter City signed McAllister in the summer of 2008 and he made his debut against Shrewsbury Town in August of that year.

Never a regular in the City first team, he was loaned to Barnet in November 2009 and then Rotherham United in March 2010.

He was released on a free transfer by the Grecians two months later and then signed for Crawley Town in July 2010.

He turned down the offer of a new contract in May 2011 and signed for Newport County.

Transfer listed as part of a cost cutting exercise, McAllister then signed for Luton Town on loan in January 2012.

In June 2012 McAllister rejoined Eastleigh, leaving them after scoring 40 goals in 116 games to join Sutton United in May 2015.

McAllister re-signed for Eastleigh on 17 February 2017. He played another 39 games before joining Gosport Borough as a player-coach in January 2018.
In June 2018 he was promoted to player manager for Gosport Borough. 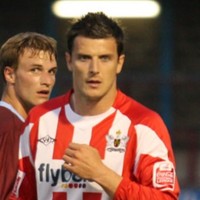 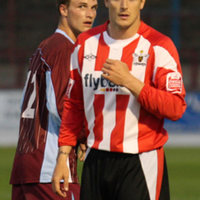