Born in 1890, Brown signed for Exeter City in the summer of 1921, having moved from Blackpool where he had played mainly as a centre-half or left-half and was described as being strong and wiry.

He began as a junior with Rotherham Town, whilst working as a waiter, but his career was put on hold during the First World War.

He later signed for Blackpool and featured in their side that won the Central League championship in 1919-20, not missing a match.

In 1920-21 Brown again played regularly for Blackpool’s reserve team, although he did play in one first team match.

He made his Exeter City debut in the opening fixture of the 1921-22 season, a 1-0 defeat at Charlton Athletic.

His stay at St James’ Park only lasted one season though and he then moved to Pontypridd in June 1922, before having a short spell with Torquay United, signing for them a year later.

He was appointed manager at Chester in May 1938, a post he held until May 1953. His next appointment was manager of Stafford Rangers in February 1954. 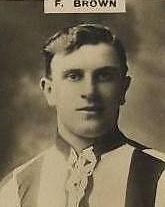