Exeter City, beaten by two goals to nothing, were sound in defence, but sadly deficient in the constructive art. The forwards had neither method nor punch, and changes in attack are inevitable after this inept performance.
The wingers were lacking in resource, but the biggest weakness was at centre-forward, where the slow and cumbersome Durrant never once went through with the ball. Both Bournemouth goals were shot by McGibbon. He scored the first one three minutes after the start, kicking into an empty net after Hoyle had pushed out a shot from Cross. It was not until the 75th minute that Bournemouth crowned continuous and intense pressure with another goal, and this time McGibbon from eight yards' range shot hard into the net from a centre by Weigh.

A bad cut over an eye may keep Steve Walker out of Exeter City's team at Watford next Saturday. He suffered the injury at Bournemouth, was off the field for 15 minutes, had two stitches inserted and returned with a heavily bandaged forehead. 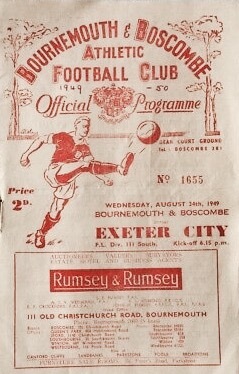