FOURTH ROUND OF THE F. A. CUP.

The Exeter City party of thirteen players accompanied by Mr Orchard, and other directors, Mr Roughton, manager, and Mr Gallagher, trainer, travelled by train to Liverpool last Tuesday. The players making the journey north were the eleven which beat Aldershot last Saturday plus Davey and Regan. They were met at Lime-street station by a group of well-wishers which included Harold Houghton, the City's star forward of the famous 1931 F.A.Cup battles, and whilst at their headquarters, the Grand Hotel, New Brighton, were visited by other old City stalwarts, Harry Gee and
Jimmy Gray. The following is an extract from the Liverpool F.C. Official Programme of today's match.

WELCOME TO OUR VISITORS FROM DEVONSHIRE.

Exeter City may be low in the Southern Third Division but they mean to put up a fighting show. Today we extend a particularly warm welcome to our visitors from the south-west, Exeter City, for this is the first time we have ever had the pleasure of meeting them, home or away. Though they occupy a very lowly place in the Third Division (Southern Section) table, we can assure them that we are not underestimating the ability of their players on that account. We realise only too clearly that some of the lesser-known clubs can put up a splendid performance when it comes to a knock-out cup-tie, and though our players are all reasonably confident that they will be able to put an end to Exeter's hopes of further progress in the national competition, they know that they will have to take this game just as seriously as though they were meeting one of the star sides of the First Division. Exeter City are managed by Mr. George Roughton, the former Manchester United and Huddersfield Town full-back, a very discerning and knowled gable official who is building up something of a reputation in Devon for finding and developing young players. Like many other Third Division sides Exeter have to depend largely on producing their own talent, not having the wherewithal to pay the big fees asked for ready-made players. Mr Roughton has also added to his staff during the past few years by judicious signings of players who have been allowed to depart from other clubs for either a nominal fee
or on a free transfer, and while this season the Grecians, as Exeter are known, have not exactly set the Devonshire lanes afire with their performances, the side is a better one that its record appears to be. Recently Mr Roughton has strengthened the Exeter defence by acquiring Raymond Goddard, who used to be a clubmate of Cyril Sidlow's when the two men were with Wolverhampton Wanderers, and after that he played for Chelsea and Plymouth Argyle. Goddard was signed only just in time for the Third Round cup-tie, and he cost close on £5,000, which is by far the biggest fee Exeter have ever parted with.

EXETER'S ADVANCE.
In their advance to today's fourth round, Exeter City have disposed of Millwall (away) 5-3, Chester (home) 2-0 and Nuneaton (home) 3-0. They were in their first two games helped a little by fortune, for Millwall and Chester both had the ill-luck to lose their respective goalkeepers in the early stages of the games, which is a big handicap to even the best of sides.

In their League games this season Exeter have not quite lived up to the expectations of their supporters, largely due to injuries and enforced changes which have followed in their wake. At home they have only three victories to their credit, v. Aldershot, Crystal Palace, and Watford. Four home fixtures have been drawn, and four lost, and in these eleven games Exeter have scored 19 goals to 20 by their opponents. Their away record will hardly encourage those of their supporters who are accompanying them today in the hope that they will bring off the surprise of the round. They have three away victories in the Southern Section, against Aldershot, Norwich, and Watford, and have drawn once, against Notts County, which was a very meritorious performance. Their other ten away games, however, have all been lost, and the aggregate of goals is 16 for and 38 against. But cup-ties are a problem apart from League matches, and nothing which has happened in past League matches will be allowed by our visitors to upset their determination to put up the best possible show they can in today's contest.

THE CUP TIE AT LIVERPOOL

The gallant City team are deserving of praise for a magnificent fight at Anfield. They lost a gripping fourth round Cup-tie by three goals to one, but came within an ace of forcing a replay against Liverpool, the leaders of the First Division. It was anybody's game until ten minutes from time. Exeter City's keen tackling half-backs had held the normally high-powered Anfield attack ing machine. Behind them Johnstone and Clark were resolute backs, and Singleton was a goalkeeper whose valiant display will be the talk of Merseyside football supporters for a long time. Exeter deserved to draw, and would probably have brought off the sen sation of the round but for two refereeing decisions which puzzled most of the onlookers. They are mentioned because of the vital effect they had on the game. Before Baron had given Liverpool the lead with a close-range shot in the 44th minute, an Exeter attack had resulted in a good goal being scored. Walker, in an on-side position and twelve yards from the net, headed high towards Sidlow. The Liverpool goalkeeper fumbled his clearance, and Smart, behind the ball and therefore on-side as well, ran forward and charged Sidlow a yard over the goal-line. How Mr Warburton could have disallowed the goal on the grounds of offside is baffling. Why he refused to award the City a penalty in the second half when a Liverpool player tripped Smart from behind is even more mystifying.

Exeter could not get the breaks they deserved, but the City team to a man won the respect of all who saw this cut-and-thrust encounter. They were Liverpool's equals in everything except attacking thrust and skill. The mighty Merseyside machine was thrown out of gear by the defiant City defence and there were worried looks on the faces of every one of the Liverpool directors until Fagan shot a second goal when the sands of time were running out. Even at this belated stage Exeter battled tenaciously and succeeded in reducing the margin with the best goal of the match. A free-kick from the left-side touchline travelled to Hutchings, on the right wing. A quick return was headed past the surprised Sidlow by the enterprising Smart, who was as good as any forward on view. One thousand eight hundred Exeter City supporters, who had travelled in three special trains all through the night, roared with delight. They cheered again when Exeter made another aggressive spurt. Then came the anti-climax. Liverpool at last took command and Payne's goal, five minutes from time, settled matters. 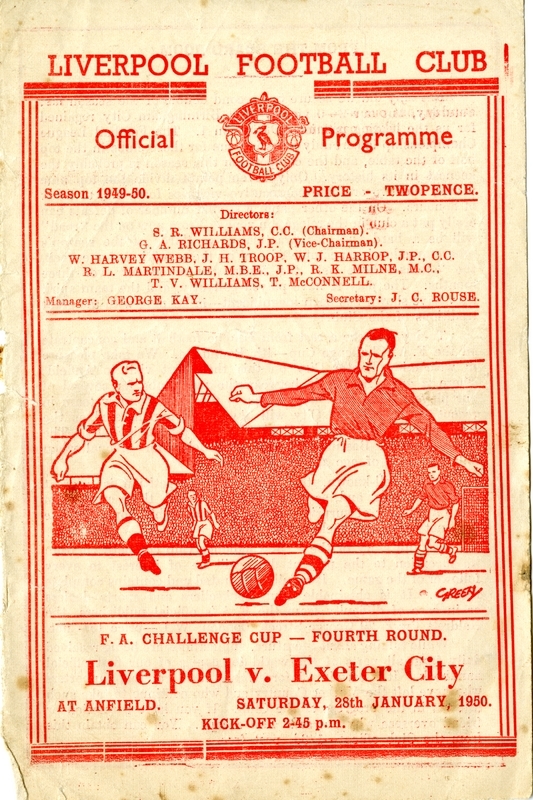