And in the Southern League
Gillingham v Exeter City Reserves

WITHOUT Duggie Regan, their goal-scoring outside left who is facing a strained tendon City faced an unchanged Torquay United team at St. James's Park to-day. Deputy for Regan was Charlie McClelland, who joined the City as an inside-forward from Blackburn Rovers last summer.

Exeter made two other changes in attack. Archie Smith returned after an absence of three weeks and took over the leadership from Walker. Angus Mackay was an experimental choice at outside-right, where he displaced Hutchings.

Though stormy weather un doubtedly affected the gate, there was every prospect that it would top the five-figure mark. Early arrivals, two hours before the kick-off, quickly filled the unreserved grandstand seats.

Neither team could afford to be beaten to-day. City badly needed two points to aid them in the struggle to get away from the bottom of the League. Torquay had to win in order to keep in the forefront of promotion aspirants,

Several big clubs were represented, and among the managers and scouts attending the game was Jimmy Seed from Charlton.

Head struck the first blow for Torquay  He won the toss, and the City kicked-off, facing the sun in the opening half.

An early burst by the United brought Singleton almost to the edge of the penalty area to gather a ball which bumped unexpectedly.

Next, a right-wing burst ended in Shaw running the ball behind, and from the goal kick the City raided strongly only to be countered effectively by a dour, quick-tackling defence.

Territorially, the City were having the better of the exchanges, and when Davey's first-time lob landed inside the penalty area, an early goal might have  resulted. The Torquay backs were momentartly out of position. But Smith and Smart were both offside.

McClelland and Mackay adapting themselves well to their new positions, led lively Exeter raids, and the first big thrill came eight minutes after the start when Exeter's outside-left made a lot of ground. In a sparkling dribble, McClelland body-swerved past Towers and then passed deftly to his left as Stuttard came in to tackle.

Had Smith, who had moved out to the wing. anticipated the pass quicker, the City would have been in a dangerous attacking position. As it was he hesitated and was beaten for possession. Twelve minutes only had gone when Exeter gained a deserved lead though the goal was a scrambling
affair.

McClelland gets a major share of the credit, for he beat Stuttard and centred almost from the corner flag. Davis went up. at the same time as Smith and the goalkeeper, worried by the City leader, failed to clear. He half-fisted the ball and it dropped behind him, for SMART to rush it over the line.

The City, continuing to play intelligent, aggressive football, made immediate attempts for another goal, and Torquay rightly survived an appeal for a penalty when Mackay's centre struck Calland on the hand. The offence was accidental, and Mr. Jacobs waved play on. Considering the heavy going, the teams were playing good football, and a combined raid on the Torquay right was easily the best thing the visiting attack had done so far. Rapid inter-passing between Shaw
and Lewis was of the highest class, and when the latter centred low Fallon saved Exeter by diverting the ball for an unproductive corner. Exeter were soon back again, and there was no doubting the City's superiority thus far.

Davis gave Torquay supporters a fright by dropping a centre from McClelland, the best forward in the game, but none of the other City. attackers was in position to take advantage of the goalkeeper's lapse. Shots from McClelland and Green wood were saved by Davis, and then Smart coolly pulled down a high ball and beat Calland, only to shoot straight at the goalkeeper.

Improving after a moderate start, the United at last displayed form in keeping with their League position. and Exeter escaped dramatically when Johnstone kicked a left-wing cross away from the goalmouth.

A deceptive dropping shot from Smith almost deceived Davis, who, jumping at the last second, just managed to turn the ball over the crossbar.

It was cut-and-thrust football now. City's goal nearly fell when Lewis dribbled through and shot inches wide of the far post.
Equally near things happened at the other end when Smith narrowly failed to connect with centres from Smart, when a touch would have sufficed,

City, who had played their best football of the season in the first half, resumed with an attack which added to the chapter of amazing Torquay escapes. Clark kicked to Mackay who, beating Whitfield, calmly lobbed the ball across the field while the Torqu defenders stood wondering what was going to happen. Davis made a belated advanca McClelland beat him to it and shot on the run.

The ball ran towards empty net. The crowd was preparing to shout goal when Calland came across and kicked clear.

Another let-off, for Exeter this time, happened a few minutes later when a centre from Shaw skidded from Fallon's head and flashed inches over the crossbar. Though only one goal had been scored at the end of an hour's play there could well have been a hatful. The story of near misses continued when Head, his goalkeeper out, jumped and nodded away a close range effort from Smith, Goddard's resourceful defence was of the utmost value when Torquay tried to break through down the middle. He was always the master of Conley. I was not always impressed with Davis, and the United goalkeeper. failing to judge a low shot from Smith, was lucky to see the ball pass inches wide.

Exeter should have had a penalty when Head fisted out a shot by McClelland, but there was no doubt about the one which brought Torquay an equalising goal 20 minutes after the restart.

Goddard, attempting to check the onrushing Conley, fouled his opponent, and Calland scored from the spot. Torquay did not deserve to be level, and the visiting defence, packing their goal, survived yet another melee. City lost their grip after this and Torquay's thrustful raids looked likelier to succeed now.

Exeter's chance of regaining the lead came when Mackay worked his was through to shoot high towards the top corner. This time Davis was equal to the occasion, and he jumped to reach the ball cleanly and make his best save of the game. A few minutes from the end Singleton punched out a free kick for Johnston to complete the clearance. Exeter's last bid was a burst by McClelland who was going through until, when challenged by Studdard, he fell full-length. The referee awarded a free kick to Torquay

Considering the heavy state of the ground this was a grand match and Exeter were unlucky not to have won. They were the better side until the last quarter of an hour and it was not until the closing stages of the game that the United showed form in keeping with their league position. Exeter's forwards played delightful football in the first half and ought to have held a commanding lead at the interval. MeCelland and MacKay did stout work in this period and so did! Smart. Outstanding in the City's half back line, Goddard was a masterly pivot and it was a tragedy when he gave away a penalty which brought Torquay their equaliser.

It was all Gillingham in the first five minutes but when Marks conceded a corner DURRANT netted from Murphy's admirably taken corner kick to give Exeter the lead. Gillingham retaliated strongly. and Salter saved twice from Burtenshaw and from Williams and Russell.

Exeter swung the ball about to advantage, disdaining Gillingham's too close game. In a surprise City attack Durrant went close from Murphy's cross-kick.

Gillingham kept up the pressure, but Exeter's defence held out, although there were several near Gillingham misses. It was Gilling ham's turn to have the narrowest of escapes. Durrant being foiled at point-blank range after fine work by Kew. Exeter were still dangerous in breakaways, making full use of the long ball.

RUSSELL equalised for Gillingham following smart play by Burtenshaw and Williams after 25 minutes. Rain and high wind at this juncture had its effect on the play, which con tinued to be poor.

More Exeter thrust saw Rew test Day with a high drive and a long range header but Gillingham continued to have more of the play and the city's defence had to work full stretch.

Gillingham took command in the second half, and added further goals through BURTENSHAW. CARR and WILLIAMS. Exeter's useful attack had too few chances.
Result: 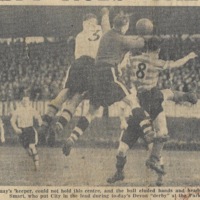 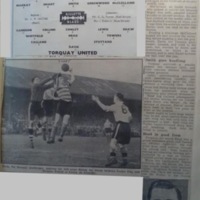 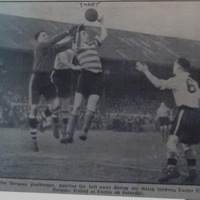