EXETER WILL NOT BE SEEKING RE-ELECTION. DIRECTORS.

THAT IS THE OPINION OF THE NORWICH CITY

After Exeter City had beaten Norwich by 3 goals to 1 this afternoon at St James's Park, directors of the visiting side paid the winning team a compliment. They said that Exeter, on their present form, were certain to escape having to seek re-election. None of the Norwich contingent complained about the result. That the victory went to the better side was the unanimous verdict.

Exeter's attack, irresistible in the first half an hour, had Norwich City's defence bewildered in a series of fast and skilful raids. Two goals inside ten minutes suggested that the Grecians were on the high road to a runaway triumph. The opening goal, by Smart, was a masterpiece of opportunism. Smith whipped the ball low across the goalmouth and Smart's deflection into the net was typical of the man who is now one of the most dangerous forwards in the Third Division. The second goal was a classic. From an opening and centre perfectly placed by Smith, Regan leapt high to head the ball into the roof of the net. Tom Lawton himself could have done no better than Exeter's outside-left. His header was correctly timed and accurately placed. Though Exeter failed to maintain their early brilliance they so dic tated the exchanges that Singleton had not a single shot to stop for the remainder of the first half. After the interval Mackay scored Exeter's third goal, and Pickwick, with a free kick from 20 yards' range, netted for the Canaries.

At Northfleet, attendance 750.
On Saturday last Exeter City Reserves became the only visiting team to have beaten Worcester on their own ground this season. Today they defeated Gravesend United on their ground by an identical score. Several alterations were made to the team. Crouch, of St Luke's, was at right half vice Squires, who crossed over, and Doyle, Saturday's left half, took over the pivotal position from Carter. Hutchings and Walker came into the forward line to replace Digby and Rew at inside right and centre forward respectively. 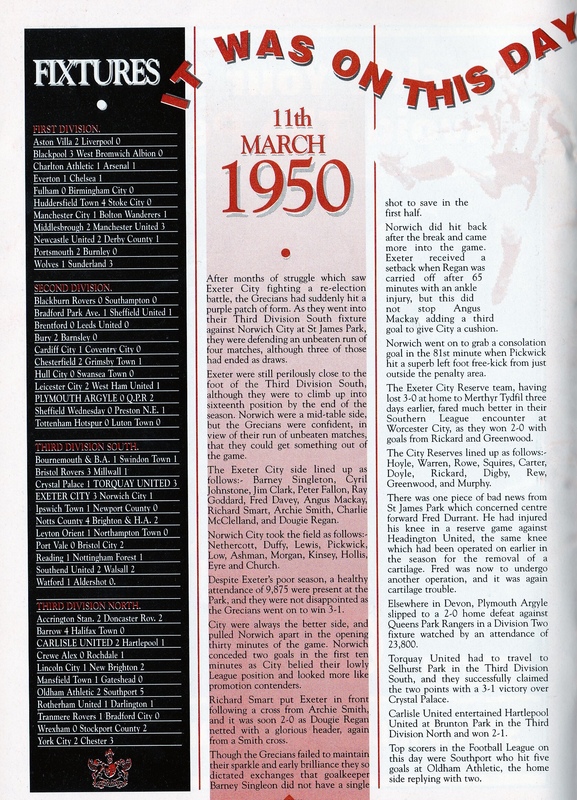