Ian Wadsworth was born in Huddersfield and joined his home town club, playing once in the 1984/85 season.

He was on trial at Exeter City, bought to the club, from Huddersfield by Colin Appleton for part of the 1985-86 season.

Appleton offered him a one year contract but he was reported as wanting two.

He played in the Devon Bowl final at Home Park against Plymouth Argyle, coming on in the 64 minute as a sub for Tony Kellow.
Exeter won the game 4-2 against a newly promoted Argyle team.
Those that remember seeing him play, say "he looked like he knew where the net was!"

He was on trial at Doncaster Rovers also playing 2 games in the 1985/86 season.

In 2010, with others, including Andrew Watson, he was instrumental in setting up Holmfirth Town. 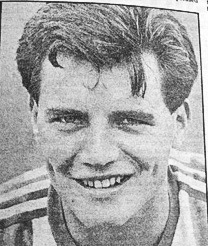