Nigel Atangana signed for Exeter in May 2019 from Cheltenham Town. Born in Corbeil-Essonnes, he  made his senior debut with US Avranches, after having trials at Luton Town, Gillingham, West Bromwich Albion and Grays Athletic.

After playing for SU Dives, he moved to Spain, joining Girona FC and being assigned to CF Riudellots, the club's nursery team.

In the 2013 summer Nigel moved to US Gravelines in France's fifth division. He appeared in 21 matches and scored one goal, in September 2013, Nigel signed for Havant & Waterlooville, he finished the season with 43 appearances and five goals, being named Havant & Waterlooville' Player of the Year.
On 19 June 2014, he signed a two-year contract with League Two side Portsmouth, He appeared in 43 games, scoring once for Pompey. On 20 January 2016, Nigel joined Leyton Orient on an 18-month contract until the end of the 2016–17 season, making a total of 45 apperances without scoring. He then moved to Cheltenham, where he made a further 55 apperances scoring 3 times. Leaving them at the end of the 2018/19 season.

In 2019/20 Nigel made 22 apperances for the Grecians scoring once, helping City reach the play-off finals in the curtailed season. 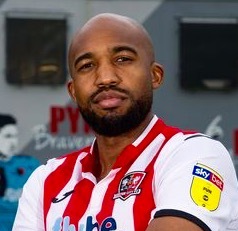