Carlisle United defender Tom Parkes had rejected the offer of a new deal to sign for Exeter in May 2019.

The ex-England Under-17 international had spent the past two campaigns at Brunton Park, playing 72 games and scoring twice.
Before moving to Carlisle he had spent a season at Leyton Orient, making 41 appearances and scoring once in the 2016/17 season.
He twice won promotion in four seasons with Bristol Rovers between 2012 to 2016, making 161 apperances and scoring 6 times.
Parkes started his career at Leicester City, playing on loan at Yeovil and Burton Albion, whilst there.


He made his debut for Exeter City in the opening game of the 2019/20 season at home to Macclesfield, and went on to play 30 times scoring twice.

Tom was not retained by Exeter at the end of the 2020/21 season. He left the club with 62 matches and three goals under his belt, including one in the 4-0 Devon derby win over Plymouth Argyle in 2019/29. He also scored against Crewe in the final home match before the Covid lockdown and the winner in "this seasons" clash with Carlisle United. Tom was influential at the heart of the defence at times this season, helping the side to eight clean sheets. “We all felt that we had the best out of Tom when he arrived here and he was in the best shape he could be,” Matt Taylor said.
"Tom really struggled in lockdown and he will openly admit that. He was unselectable for the play-off campaign and the start of this season, but we worked so hard since then to make himself available. His performances have reflected his struggles and he probably hasn’t had that consistency, and the emergence of Alex Hartridge has given us a different dynamic at the back.”

In May 2021 Tom said the following after being released by Exeter.
“I want to thank all the fans, players and staff at Exeter City for the last two years.
I wish the club all the best for the future, it has been amazing playing for the club.
I am looking forward to the future for me and my family wherever it may lead.”


In May 2021 Livingston FC announced the signing of Tom Parkes.

Livingston FC is delighted to announce the signing of central defender Tom Parkes from Exeter City.

The 29-year-old joined Exeter in 2019, racking up 74 appearances, narrowly missing out on League 2 play-off success at the end of the 19-20 season, losing to Northampton in the final at Wembley.

Tom’s most notable spell was whilst at Bristol Rovers where he played 190 times between 2012 and 2016, captaining the club to play-off success against Grimbsy at Wembley to guide the Pirates out of the Conference and back into the Football League.

He joins the club on a one-year deal with incentives in place which could see that increase to three years.

Manager David Martindale said: “I think Tom is an excellent signing having played close to 400 professional games, with the majority of those coming in League 2 in England. A real no-nonsense defender who is a leader on the park, aggressive in both boxes and has a very good left foot. Tom will bring a wealth of experience to our squad and I believe there is still more to come from him having watched him closely and spoken to the player himself at length.

“He comes to us at a great age and I’m really looking forward to seeing what Tom brings to the group on a match day. He has shown a real hunger to try the football up in Scotland and was very easy to work with due to his appetite to try something new.

“Tom will wear the number 4 shirt for the forthcoming season and has signed a 1-year contract with incentives that could see him play his football at Livingston for the next three seasons if all goes well.

“Tom was part of the Bristol Rovers team that, alongside Cristian Montaño, secured promotion to League 1 during the 2015-16 season.

“I’m really happy with how our recruitment has gone to date but I am still looking to bring another 3 or 4 players in at the earliest opportunity to help integrate them into the group for the new season.” 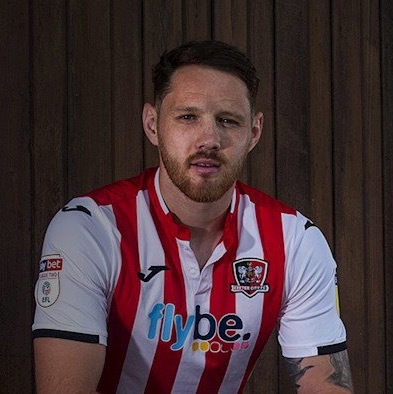