Purchase of St James's Park
The purchase of its ground, St James's Park, Exeter was on June 24th 1921 completed by Exeter City Football Athletic Co.Ltd.
Mr M. J. McGahey, the Chairman of  Directors, states that the major portion of the ground was the property of the trustees of the Lady Anne Clifford's Charity. The residue of the ground, and a garden at the back, and a house abutting Old Tiverton Road, belonged to Sir Henry Duke.

It will be remembered that Sir Henry, when he was MP for Exeter, purchased this last mentioned property in order to permit the extension of the old City ground. The club has been paying him rental in respect of this land ever since.
It was useless for the Directors to buy part from the Charity, and for the other part to be owned by someone else.
Therefore, they approached Sir Henry Duke with regard to the acquisition of the property owned by him. Sir Henry has met the club in a very reasonable spirit, and sold them the land owned by him for £2500. The price given by the football club to the Lady Anne Clifford's Charity for the remainder of the ground is also £2500.

Improvements to be made.
This purchase is a very wise proceeding on the part of the City Directors, because, unless they bought, by the terms of the lease they were subject, when the lease expired, to grave increases in rent, and if they gave up occupation every penny they had spent on the ground and on structural improvements would have been thrown away, as one of the conditions of the lease was that if the club gave up possession the ground must be restored in its original state.
Considerable improvements are in contemplation for the future; for a long time past the Directors have been considering the provision of further covered stand accommodation.
Now the ground has been acquired by the club, any money expended on improvements will be spent on their own property.

Dick Pym Signs for Bolton.
Dick Pym, the Exeter City goalkeeper captain, was transferred from the City to Bolton Wanderers on June 27th, at a fee not made public. The negotiations have been in progress since May 7th, the date of the Bristol Rovers match at Exeter.

City Goalkeeper's Letter to the Press
The following letter from Pym, and handed to the representative of the "Express and Echo" by Mr S. H. Thomas, explains itself:-

"With reference to my transfer to Bolton Wanderers, I think in fairness to the Exeter City Club I ought to explain that it is my own desire that I am being transferred, and it is only pressure by me that has resulted in my leaving my old club.
I have read the letters appearing in the local papers, but the writers have overlooked the fact, that having adopted football as a profession, it is a duty I owe myself to advance as far as I can in that profession. It must be quite obvious that the possibilities of advancement with a club like Bolton Wanderers are such as are impossible with Exeter City.
The Exeter City Club, who have always been perfectly fair to me, and, in fact offered me a benefit this season, were not anxious to part with me, and had I expressed a wish to stay, they would have absolutely declined to transfer me"

In Lancashire the Football Press has given the matter of Pym's proposed transfer very little respite since the playing season ended, and the following passage, which appeared in a Bolton evening newspaper recently, is of interest.

"....., but the prespect of Pym coming to Bolton from Exeter has not entirely disappeared. It is yet a case of terms, and the directors and management of the club are just as keen on arriving at a settlement as you and all of us, for the keeper would be, I am told, a great acquisition. Somebody was asking the other day why, if the Exeter goalkeeper was such a fine artist, as the sum of money asked for his transfer would suggest, the International Selection Committee have never spotted him. The only reason I know is that Pym has an extensive business in fishing to which he has been devoting a lot of energy, perhaps to the detriment of football honours. Now he finds he can give more time to the professional side of the game, and is not unwilling to come up North in the interests of his business. May Pym become a Trotter if he leaves the City of Exeter..."
From the Bolton Evening News.

Many New Faces.
At St James's Park everyone connected with the Exeter City Club is going about his business in that quiet, composed way that means business, real business.
There has been no boasting, no rolling of drums. Quietly the new team has been got together, quietly they have settled down to their training, and now as quietly they face the task of opening out before them with the dawn of Season 1921/22.

Good Clean Football Wanted.
The "Grecian" following are eager to see a lot of good, clean, scintillating football, games that will be some measure of compensation for the plodding, somewhat stodgy play that they saw so much of during the last campaign.
Happily, the practice matches have served to show the forwards a very lively quantity, the halfback line is experienced, and sound, there are some good full-backs on the register, and the club should have no anxiety regarding the last line of defence.
At the Annual Report of the Club, to be held in mid-September, the directors will be able to report a very satisfactory state of affairs financially, for Exeter City received a very gratifying measure of support all through last season.
Better success on the playing field this winter will bring in increased attendances, and this is particularly desirable in the case of the Reserve Team's home engagements, now that they wil be completing in the Southern League, and meeting clubs as far afield as Norwich City and Brighton.

Ground Improvements.
Thanks to a cordial working understanding with Friernhay, one of the leading amateur clubs in the city, the Exeter City club will be in position to avail itself of the services of well known local amateurs in case of need to fill vacancies that may occur through injuries and other causes.

The playing field is in excellent condition, much having been done during the Summer to benefit the surface.

Numerous minor improvements have been effected in offices and dressing rooms, including the provision of new accommodation for referees.

Charlie Pratt having thrown in his lot with the new Torquay United club, the City have perforce had to engage a new trainer. He is George Goodwin, from Port Vale, a keen, alert and fully capable man.

There are many new faces in the Exeter City camp, and many old ones have departed. Of last year's players only Dockray, Pollard, Rigby, Green, and Vowles remain.

Ellis Crompton joins, after 8 seasons at Bristol Rovers, starts as Captain.
Jimmy Rigby will be in charge of the Southern League side. 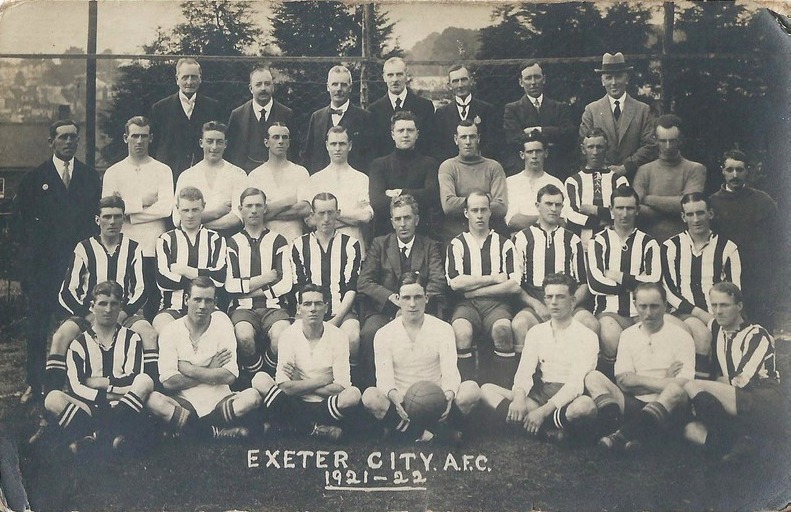