Lewis Ward came through the academy at Reading, under the direction of ex-Grecian manager, Eamonn Dolan.

In June 2018, Ward signed a new contract with Reading, he never played a senior fixture for the Royals.

Lewis Ward had a series of loan spells, including Whitehawk in 2014, Sutton in 2016, and in May 2016, he joined Icelandic Úrvalsdeild side Fylkir, playing 3 games, before signing for Margate in August 2016, where he made 19 appearances.

He then had two spells with Hungerford Town, making 27 further apperances and moved on loan to Aldershot Town in November 2017, playing 25 times for the shots.until Jan9]

He joined Northampton Town on a season-long loan on 27 July 2018.He made his professional debut on 14 August 2018, in the EFL Cup, and made four further appearances in the EFL Trophy.

On 14 January 2019, Reading announced that Ward's loan with Northampton Town had ended early, and that he would join Forest Green Rovers, where he played 12 games.

In June 2019, Ward signed for Exeter City, after being at Reading for 13 years,  on a two-year contract for an undisclosed fee!

He has obtained a degree in Sports Journalism from the University of Staffordshire.

He made his debut for Exeter City in the opening game of the 2019/20 season at home to Macclesfield. He continued to play in goal until he suffered a broken arm.

The incident happened in the 86th-minute at Gresty Road. An X-ray after the match confirmed that Lewis has fractured his Ulna.

Speaking about the injury manager Matt Taylor, said: “Everyone at the club is very disappointed for Lewis, who has been excellent at the start of this season."
Lewis recovered and was set to play against Ipswich in January but was injured in the warm up. By the end of the season curtailed season Lewis had made 20 apperances.

Lewis moved to Portsmouth on loan in the January transfer window in January 2021.
Having signed for the club in June 2019, he made 34 appearances for the Grecians before being released by Exeter in May 2021. 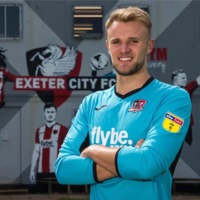 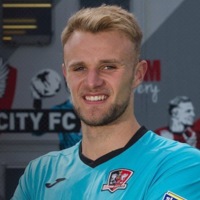