Senastional eve of the season happenings are reported from St James Park. In the Express and Echo on Friday 11th August.
The two new players are Raymond Freeman, an inside-forward who had three and half seasons at Manchester City and Smith who was on Brentford's books last season.
A season ago Smith was regarded as one of the best full-backs in England. He was with Bolton Wanderers then, and, was on the verge of International honours. An injury subsequently threatened to end his career and Smith left Burden Park. Specialist treatment, however, enabled him to return to the game, and, he had spells with Swindon, Rhyl, Huddersfield and Brentford. A fee of £8000 was on his head whilst at Bolton.
Freeman played three games for Manchester City in the 1938/39 season, scoring once.

It was noted that Halliday did not appear in the teams as he as was suspended due to a "breach of regulations" said Mr Foot, the club secretary, No further comment was made.

Militiaman Shines in "Whites" Attack
Nine of last season's players figured in the Stripes team, which defeated the Whites by four goals to one.

But the Whites, although beaten by a clear cut margin, were not so overwhelmed as the score suggests. On the contrary, they were the neater side before the interval, and it was somewhat against the run of play when Fellowes crashed a free kick into their net from just outside the penalty area to give the Stripes the lead two minutes before half-time. Fellowes went near with subsequent free-kicks.
Half Time:- Stripes 1-0 Whites.

In the second half, and notably during the last twenty minutes or so, the winners established a definite superiority. Their second goal, a spectacular shot on the turn from Ebdon, was the best of the match. Crawshaw beat Blore from close range to close the gap in the scores. The Stripes' goal was also in real peril when the fair- haired Freeman ran through and drove hard against the crossbar with Blore beaten. Sutherley then scored the third and fourth goal for the red and whites.
Shrewd Touches.
The work of Freeman, formerly of Manchester City, was stylish and purposeful, and his many shrewd touches and accurate passes won frequent applause from the 2000 spectators. Exeter City will get excellent service from him, provided arrangements can be made to secure his continued release from Topsham Barracks, where he is at present undergoing training as a militia-man. 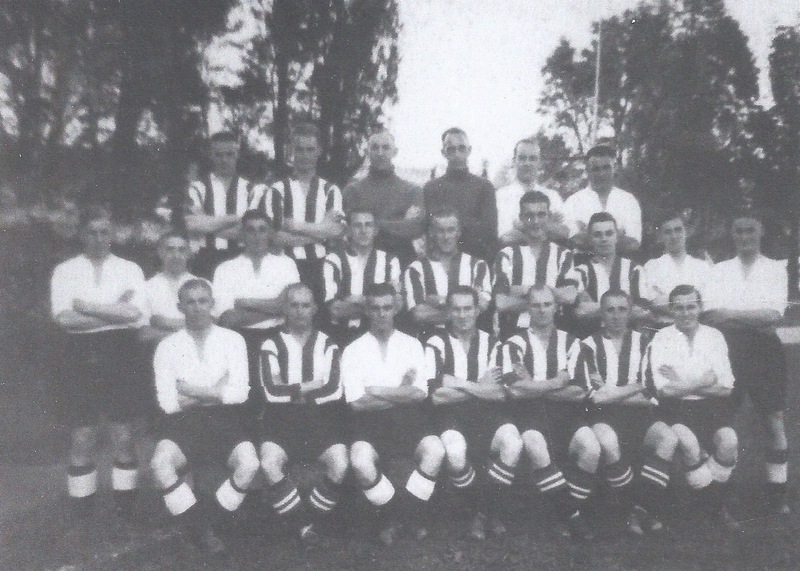