New innovations
The numbering of players was not the only innovation in the F.A. Jubliee Fund match at St James's Park. There was almost a brand new Argyle team, new in style as well as personnel, and the new standard goal posts and crossbars.

What was unchanged was the intense rivalry and crowd excitement always present on the occasion of a "Devon Derby."
The match was billed as a friendly. It had all the ingredients of a Football Association Cup-tie, what with free kicks innumerable and incidents which followed followed the adoption of vigorous tactics by sides that were over-impetuous. It was an "unfriendly friendly."

City Deserved a Draw.
Exeter City, beaten by two goals to one, were a trifle unfortunate and deserved a draw. Those among the six thousand spectators who anticipated an easy Argyle victory were disillusioned. Far from being comfortable winners, the Argyle had to battle for all they were worth from start to finish, and they owed a lot to Middleton, whose positioning was faultless and whose fielding of the ball was invariably perfect.

Though this was a match in which subtle touches were pushed into a faint background against the less pleasing spectacle of much hard endeavour and equally hard kicking, there was plenty of thrills to compensate. The first of these came in the opening two minutes, when Riley and then Freeman narrowly failed to get to low crosses with the Plymouth goal in grave peril. The Argyle were lucky to get away with it both times.
Against the run of the play Plymouth took the lead through Lewis, who shot into an empty net after Little had made a determined, though unavailing, effort to block a drive from Sargeant on the goal line.

A Flattering Lead
The lead was flattering. The movement which produced it was good, a sweeping, inter-passing raid, rhythmic, stylish, and one of the few reminders of cultured Argyle sides of bygone years.
The City's equaliser, almost on the interval, was obtained by Ebdon, who headed Fellowes's free-kick into the net through a cluster of players in the penalty area after Middleton had come out but failed to clear. This was the goalkeeper's only mistake of the entire match.
Half Time City 1-1 Argyle

A desperate second half struggle for the winning goal ended in the Argyle's favour, and it was a masterly piece of opportunism. The ball had been lobbed into the middle following a throw-in. Glover jumped quickly, caught the home defence off its balance, and deftly headed down to the waiting Sargeant. Within a matter of seconds Sargeant had driven a cross-shot at rocket-like speed high into the back of the net.

Exeter were beaten, but certainly not disgraced, and the match showed them in as favourable a  light as their Second Division opponents.
The defence generally showed better covering ideas than they did in the majority of last season's games, and the half-backs were a workmanlike trio, with Gallagher outstanding in the marking of Pat Glover, the famous centre-forward who once scored four goals against the City for Grimsby Town in a third round Cup-tie. Ebdon, Freeman and Wardle were the best of the City forwards.

In spite of some dour defensive methods Exeter City Reserves in the Jubliee Fund match at Home Park came a cropper against Argyle Reserves,
and were beaten by four clear goals.
The Argyle goals were scored by Thomas, Olver and Smith (2) 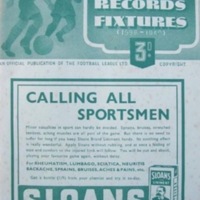 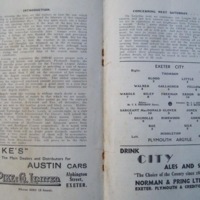 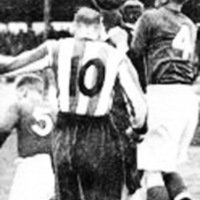 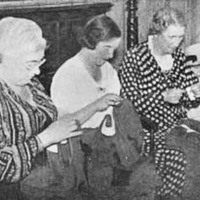