A Return to the Glamorous Days of Soccer.

The grand inquest has started. Another football season is about to start and what have we? Plenty of talk about dispensing, once and for all, with the negative, unspectacular type of football that has been the product of the stopper half-back, reinforced by inside-forwards who are reluctant to advance within the penalty area of the opposition. There have been heaps of pious appeals to make the game more open, and exhortations to players to concentrate more upon scoring goals and less upon stopping them. There has been a general prophecy that the glamorous days of Soccer are about to return.
In other words, there are hopes and expectations in abundance. It was always so on the eve of a new season. But it is not likely that, despite all the fine talk, that the 1939/49 vintage will be greatly different from the immediate preceding years. The national outlook remains unchanged. What of the local prospects?

Will Exeter City enjoy a more successful season than has been experienced in the last two campaigns?
Has the cycle of fortune started to run their way? These are the questions which are uppermost, inevitably, at this time of year.

The first point that emerges is that the City, with eight men available who were regular members of the first team last season, ought to be fairly sure of being up to last year’s standard. That is a logical assumption. Whether or not the club will do any better must depend upon two important factors. One is blend, which in its turn produces the right spirit, and the other is the manner, and the quickness, in which the newcomers settle down.

Defence Poser
Neither the practice match nor the Jubliee Fund game can supply a definite answer to these contingencies. All that can be done at this stage is to examine is to examine the credentials of the recruits engaged by Mr English during the close season.
Thomson has plenty of experience and five seasons with Brighton to back his claim to be regarded as a useful goalkeeper.
The two new full-backs who have so far  been in action, Blood and Speed, have staked early claims for first team inclusion.
Gallagher, who had an unexpectedly quick run with first team in the Jubliee match, did not shape at all badly against P. Glover, the Argyle’s crack centre-forward. Defence was the club’s biggest difficulty during the greater part of last season, and until there is proof that it can be solved it cannot be considered that the City's troubles are over.

Freeman, an inside-forward, who is on militia duties at Topsham Barracks, has already impressed in pre-views. His presence may create a spot of difficulty among the team selectors, for if he finds a place in the League side one of last year's trio of inside forwards, Riley, Bowl and Ebdon, will have to drop out. It could be an embarrassing position, seeing that each of these  three players was a fairly consistent goal-getter.
But there is no worry about this part of the attack.
The chief concern, as far as the forwards go, is the wing positions, where four youthful claimants will be relied upon by the management to remedy a long standing weakness.
If Exeter City have managed to overcome the major difficulties which they knew existed when the task of building the team commenced, then the season ahead should be brighter. If not, it will be just a case of "as you were," and that did not represent a high-spot in efficiency.
The greatest needs of the side last May were defensive steadiness and effective wing play.

Second Benefit for Jack Angus
One player whom everybody wants to enjoy a good season is Jack Angus, now in his tenth year with the club, and as a loyal a servant as any that has come to St James's Park over the lengthy period since the City adopted professionalism.
More brilliant men have worn the Exeter colours, but there has been not one more conscientious. The reason for mentioning this is that Angus, is the sole remaining link with the club's great Cup season, is to get his second benefit this term. Supporters will, no doubt, show their appreciation when the time comes along, and it is to be hoped that an attractive match will be fixed up for the occasion.

Numbering of Players.
The numbering of players, a measure that is long overdue in the opinion of most people, comes into operation in all Football League games this season, and it is bound to make the matches easier for the spectators to follow.

New Type of Goalposts
The new type of goalposts and uprights, two sets of which were formally presented to Exeter City by the efforts of the Supporters' Club, will also be in use in all matches in the Football League.

Coming away from the Goldstone Ground in Brighton, a few years ago, Jimmy Gray, then Exeter City's right back was overheard to remark: "We have played against the best goalkeeper in the League today."
That goalkeeper was James Thomson. Time marches on. Gray has in the meantime gone out of the game and Thomson is now at Exeter. Then he moved to Brighton, where he was more or less an automatic choice for the first eleven throughout his five seasons with the Sussex club.

One of the outstanding new players in the City's practice and Jubilee Fund matches has been Jack Blood, the well proportioned full-back signed during the Summer from Notts County.
Notts County is Blood's one and only league club before joining Exeter. It was natural that Blood should have started with the County, for he hails from a district quite close to the ground at Meadow Lane. Blood stayed with Notts for five years, four of them as an amateur, having declined repeated offers to turn pro until twelve months ago. At least one Southern Section club besides the City sought his services this summer, and he also had an offer to join Glentoran, who played in the Irish League.
Fred Speed was born at Lincoln, comes to Exeter with the reputation of being a conscientious club-man, and his versatility is proved by the fact that he played forward, half-back and full-back in the course of his career with Hull, York City, and Mansfield Town.
Dick Pym, now the City's assistant trainer was finishing with first class football when there stepped into the Bolton Wanderers dressing-room a young full-back, Bob Smith. And the young man with a name revered among the fraternity that haunt Burnden Park quickly made his mark and attained eminence comparable with that gained by his illustrious predecessors, "Joe" and "J.R" of the Smith clan.
£8 000 was the Bolton evaluation of Bob Smith in the days of not so long ago when ranked as England's top-grade full-back, he was chosen for the Jubliee International, against Scotland. Then came a break-down as puzzling as it was regrettable. Smith developed sciatica, and left Bolton subsequently to play for Rhyl, Huddersfield, Swindon, and Brentford. If he comes back, the City will have made the biggest bargain of recent times, for Bob Smith, according to Dick Pym was a better back than Alec Finney, who starred in Bolton's remarkable trio of Cup victories.
The present state of Europe makes it uncertain when Gallagher, Exeter's outstanding centre half-back, will be available for duty in the Football League. At present he is doing military training at Pirbright Camp, near Aldershot, and does not know  how long he will remain.
This Grenadier Guards reservist was a club mate of Jack Blood at Notts County, and he had a number of first team apperances with the "Magpies." He created a good impression in the Jubliee Fund match with Plymouth Argyle, and kept a tight hold on Pat Glover, the Argyle's star centre-forward.
Exeter's other new signing for the half-back line is Stanley Cutting, who was born at St Frith, near Norwich, and previously assisted Southampton.
On Manchester City's list at £400, Ray Freeman is a young and talented inside or centre-forward whom Mr English has sought for some time. Now he has got him he is pleased, but he would be more happy if Freeman was a fixture. But he is not. The position is:- Freeman unsigned and on Manchester City's transfer list, has been called up for militia duty and sent to Topsham Barracks. The City got in touch with Manchester and asked if they could have Freeman during his stay with the militia. The answer was "Yes," provided the military authorities were agreeable to release for match purposes. That hurdle was overcome, and so Freeman is here, more or less on loan. In due course the City will have to negotiate again with Manchester if they want Freeman for keeps.
Cyril Crawshaw, centre-forward, was one of the few Englishmen playing in Scotish League football last season. He was born at Eccles, near Manchester, and played for Fleetwood before joining Queen of the South. He also has a trial with  Rochdale.
George Wardle, who will be Exeter City's first choice for the outside-right position in the opening matches, has come South for the first time. Not yet twenty years old, he has plenty of time in which to develop.
Wardle graduated in North-Eastern junior football before moving to Middlesborough, where he made occasional apperances with their first eleven, and figured more or less regularly in the Reserves, who play in the North Eastern League.
A colleague of of Steve Walker at Gainsborough, Charlie Windle, outside-left rejoins his friend at Exeter. After leaving Gainsborough Trinity, with whom he proved to be one of the best wing forwards playing in the Midland League, Windle fixed up with Bury, and remained there for nearly two seasons. He can play on either wing and also at Centre-Forward.
One of Exeter City's finest full-backs of all time was called J.Gray. Now they have taken on an inside forward of the same name. Gray comes from Hebburn, near Newcastle, and is therefore one of a long line of players Mr English has taken from that district. 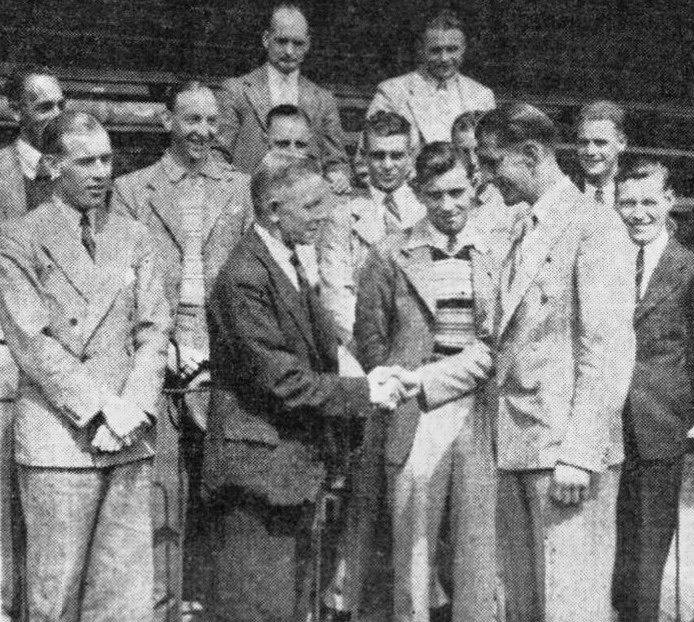