Quickness and Thrust Won the Match
Officials of the Football Association and Football League stated on Wednesday last that having no information to the contrary their programmes would be carried through today as arranged. So the Football League clubs carried on as usual, (the day after Germany invaded Poland) but it looked very much as if this afternoon would mark the last kick of a season of only one week's duration.

Exeter City had to make the long journey to Hanley, Stoke on Trent, to face Port Vale.

The City took the lead five minutes before the interval. A strong attack on Exeter's left resulted in Bowl preventing the Port Vale defence the clearing, leaving Riley with a gilt-edged opening, which he was quick to seize.
Exeter were the quicker and more thrustful team and thoroughly deserved their victory.
Attendance 5102.

Less than a thousand spectators were present at St James's Park to see the start of the Southern League match between Exeter Reserves and Hereford. 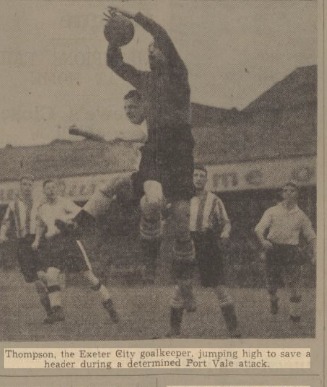