Attendances in the first few seasons, was either missing or just estimates. Often rounded or at best the income reported. At the end of each season, the club reported income from gates and the tax due.

In 1901/02 the FA Cup competition introduced a rule where 5% of the gate receipts had to be remitted to the FA. However, some county FAs had already introduced similar levies for their competitions. It is fair to assume that this must have required some form of recording of attendances and gate receipts?

An Entertainments Tax was introduced on 15 May 1916.
The tax was levied on the price of admission for a wide range of entertainment including football. There were three methods to collect and pay over the tax.
In football’s case where a large number of spectators are admitted in a relatively short space of time then they did not have to issue a ticket to each spectator but could pay over the tax based on certified accounts or satisfactory security being given. This required turnstiles and all the details recorded in a gate book that could be subject to inspection and prosecution if everything was not in order. At this time the use of turnstiles was well established in football otherwise the Treasury would not have allowed football to self-certify the tax it was collecting.
Exeter had turnstiles by this time, and even in the first season at the Park, a sentry hut was used for the collection of the entry fee.
In many of the early reports the income is reported and not the gate number. In some reports in the press, it mentions the crowd before the start of the game, this is the figure that is reported in the books produced since then, however further reading of the reports will say such things as "and by half time the ground was nearly full" or " after the start of the game the crowd was close to 8000". 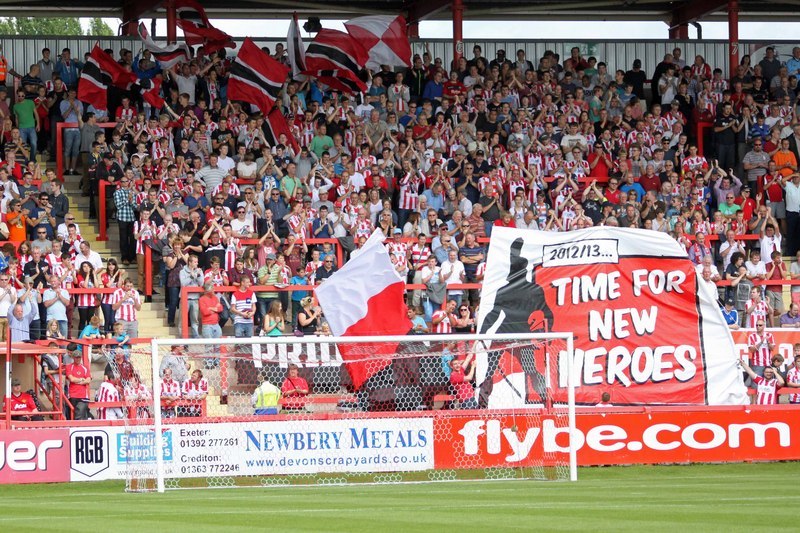