Whiteside was signed by Exeter City as a part-time professional from Irish League club, Portadown, in November 1955.

He had made a good impression and scored in a reserve team match against Gravesend and Northfleet and was signed a couple of days later.
On the 17th of December 1955, he played and scored twice against Kidderminster Harrier's in a Southern League fixture in front of 5054 fans, the largest reserve team crowd of the season. (Tickets were on sale for the Stoke City Cup tie).

His first team debut came in a 3-1 defeat at Torquay United on New Years Eve, and he was to feature in two more matches, scoring against Walsall at St James’ Park.

However, his contract was cancelled in April 1956 and he returned to play for Portadown. The following August he was back in England having signed for Scunthorpe United, where he played two league matches for them.

After leaving Scunthorpe he again returned to play for a third time for Portadown. 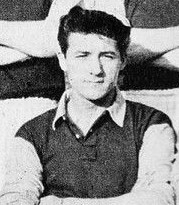