Walker was a team mate of Exeter City’s Charlie Miller at Plymouth Argyle having arrived at Home Park after playing for Rutherglen, Kilsyth Emmet and Glencairn, before signing for Argyle in 1922, He had won three Scotland junior international caps.

He moved to Exeter City in the summer of 1926 and made his debut in the 3-0 home win over Merthyr Town in August 1926, scoring one of the goals.

At the end of the season, Walker signed for Wigan Borough, where he featured in 8 Third Division North matches for them. 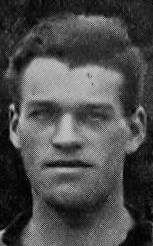