Situated fifty-six miles away from St James Park, it was a relatively short journey for the Grecians last time they faced Weymouth at the Bob Lucas Stadium in the fifth tier of English football. The ground was previously known as the Wessex Stadium, but changed its name in 2010 in homage to the long-serving president Bob Lucas during his fight with cancer. Lucas died a month after the stadium was named after him, aged eighty-five. 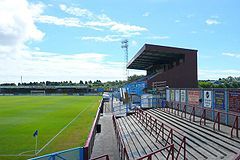