The McCain Stadium was a 6,408 capacity stadium located in Scarborough, North Yorkshire. It was the home of Scarborough FC, a defunct football club who last played in the English Conference North before they were dissolved on 20 June 2007. The gates at the entrance to the ground are to be incorporated into a new sports complex to serve as a lasting reminder of the former Stadium. 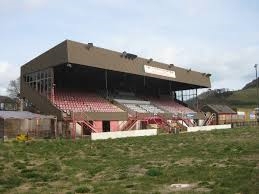