Tomlinson had a meteoric start to his career. After coming through the ranks as a trainee with Bradford City, and playing just twelve league matches and scoring six goals for the club, he was on his way to Manchester United in July 1994 for a fee of £100,000.

He had been spotted whilst playing for Bradford City against United in an FA Youth Cup tie.

He never played a league match for United though, but did go out on loan to three clubs.

Tomlinson then signed for Macclesfield Town in July 1998, where he netted 6 goals in 46 appearances, half of which were as a substitute. After two seasons at Moss Rose he moved to Exeter City in June 2000.

He made his debut for the Grecians in a 2-1 home defeat against Cardiff City on the opening day of the season and scored Exeter’s goal. He remained at St James Park for two seasons.

Signing for Stevenage Borough in August 2002, he stay was a short one and after 9 appearances, he then spent a month back at his former club Bradford City in November 2002. 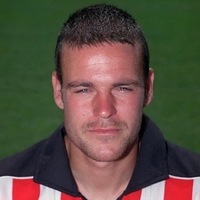 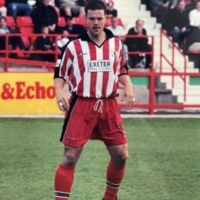