The 2013/14 season saw Exeter City playing in the fourth tier of the South West Combination.
Home games were to be played at Topsham FC, on
Sunday at 2pm. It has been a season of fantastic achievements for Exeter City Ladies, who finished their campaign this weekend getting three points off Larkhall.  The Grecians narrowly missed out on promotion into the FA Women’s Premier League, finishing runners up to local rivals Plymouth Argyle.
This was Exeter’s second season in the South West Combination, and this season’s finish as runners-up is the clubs highest ever finish – and it is a tremendous achievement considering at Christmas they were well down the pecking order in mid-table.  A superb run which saw the ladies only lose on two occasions since the New Year saw them push the eventual champions to the wire.  Exeter also reached the Devon FA County Cup final again, but weren’t able to retain their crown as the Pilgrims took the win.
Manager Chad Gribble, who is due to step down at the end of the season after being appointed the academy’s new Foundation Phase Lead Coach, was thrilled with the achievements of the players.  He said: “The players are a success of the environment they have created in the way they train at a high intensity, demand a lot of each other and look out for one another.  They are a really tight-knit group who have been great to work with and help develop.
“They have every chance of achieving promotion next season if they continue to work as hard as they have this season and keep believing they are good enough.  I genuinely believe this is the best group of players the club has had and there is tremendous potential there to be built upon.”
Exeter’s ladies will finish with their award ceremony at the beginning of June, so no announcement can be made yet on who has taken what in what has been a successful campaign.
Centre-forward Helen Kukor said: “I think we’ve had a great season – nobody expected us to do that well and I think we’ve surpassed all expectations.  Not that it’s been easy – travelling away most weeks with 11 or 12 players isn’t ideal, but the results we have come our way which shows the strength of the bond between the players.  Naturally we were gutted to lose to Argyle but I think we will be stronger for it next year.”
Captain Catherine Wright added: “It has been a brilliant season and we deserve to finish where we have due to the team spirit shown by all the girls and coaching staff on and off the pitch.  We’ve had plenty of games where we have had girls playing out of position for the team and also playing through injuries and we have gone on to pick up many points we weren’t expected to get.  Me and all the girls have enjoyed the season and look forward to the next campaign.” 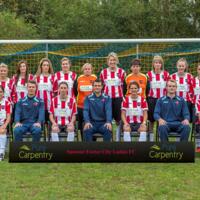 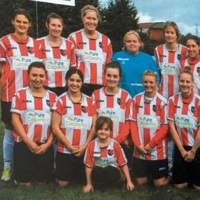