2011/12
Seven new teams competed in the South West League in the new season.


Cullompton Rangers return to the league from the South West Combination with Champions Keynsham Town Development heading in the other direction, whilst Blandford Utd, Bridgwater Town and Cam Bulldogs enter Eastern Division One. Callington Town, Dobwalls and Stoke Gabriel are promoted to Western Division One where Marjons Old Suttonians will now be known as Morley Rangers.
Cullompton folded before the season started and Weymouth replaced them.

Exeter had signed a number of new players including, Lola Garcia Sánchez, Emma Redwood and Dani Garland as well as Catherine Wright who joined from Cullompton.
After two promotions in two seasons City were confident going into 2011/12 season returning to the South West Premier Division. City's final pre-season friendly saw them face a home game against Yeovil, who were relegated from the National Premier League last season. The Glovers play in the Combination League, which is one league higher than the Grecians.

The fixture, played at City's home pitch at Topsham Town Football Club, was the Ladies' toughest challenge to date and their last before commencing their league campaign got underway last Sunday (match report to come) with a home match against Stoke Lane Athletic. Exeter's new signings Lola Garcia Sanchez, Emma Redwood and Dani Garland all made their debuts. City attacked from the outset, with Yeovil conceding a corner in the opening minutes of the game. New signing Catherine Wright (formerly of Cullompton Rangers) picked out Josie Copp from her corner kick, who headed home to put City in the lead.

Yeovil applied pressure throughout the first half, but the defence held firm until the half time whistle.

Within minutes of the second half Yeovil had equalised as the ball was scrambled home in City's penalty area. But the home side upped the tempo and once again found themselves in front when midfielder Garland headed home a cross from winger Natalie Shenton. Manager Steve Tully changed the formation to 4-4-2 and brought on striker Helen Kukor. Within moments of entering the field Kukor added her name to the score sheet, slotting the ball home after taking on the keeper one on one.
City kept applying pressure and Kukor found herself through on goal again within minutes, placing the ball into the back of the Yeovil net!
(4-1) Yeovil clawed a goal back towards the end of the match, when a corner was curled in at the far post.
Shortly before the full time whistle Kukor grabbed her hat-trick, again taking the ball around Yeovil keeper to score. This was a fantastic 5-2 win for City ahead of the start of their new season.

They stormed into first place with 3 huge wins.

They finished the season by winning promotion again, the 3rd time in 3 years under the guidance of manager Steve Tully. And 4 promotions in 5 years, a fantastic achievement.

Congratulations went to Exeter Ladies, Champions of The South West Premier league and are promoted into the South West Combination League, the third division of the Ladies football. It had been a great season! 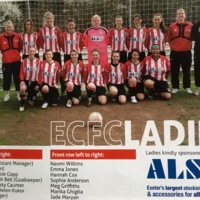 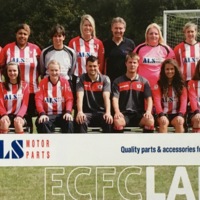 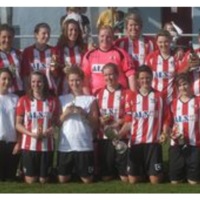