After finishing as Champions of the South West Women's Football League, Premier Division, in 2001/02 the team gained promotion to the South West Combination Woman's League.


Their first season at this level, was hard with the team struggling to finds its feet, but they managed to find their form near the end of the season and avoided relegation. 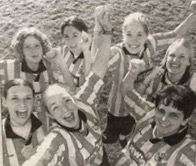