Barnstaple Town, Alphington, Axminster Town, Paignton Pilgrims and Totnes & Dartington SC Res will be the newcomers, whilst Champions Totnes & Dartington SC have accepted promotion into the South West League following their success last season and Rolle Rockets have disbanded due to the closure of their college.

The league constitution was agreed by the Managment Committee and is as follows:


Steve Tully took over the management at the start of the season, with Exeter in the second lowest level in the Women's game, supported by Exeter Development coach, Chad Gribble, as assistant and coach. In their first season in charge the team won promotion to the the Westward Developments Premier League.


City ladies end their season on a high

Exeter City were welcomed onto the pitch with a guard of honour, acknowledging they had won the league in advance of this, their unbeaten record to date and had been challenged by manager Steve Tully not to let this slip in the last game of the season.

City stamped their authority on the game from the outset and a cross from centre forward Hannah Cox in the opening minutes was tapped home by left winger Zoe Kingdon. City pushed forward and continued to dominate the play. A corner from City's Gabby Stoneman found striker Kirsty Caunter to net her first. A third goal followed soon after when a cross from Kingdon found Caunter on the top of the penalty box, who struck the ball cleanly into the top of the net.
Exeter Phoenix showed no sign of giving up and a ball over the top caught City's defence off guard. Phoenix' striker hit the ball hard into the bottom left corner, leaving keeper Rosie Maguire with no chance. City answered quickly with a cross from Kingdon, finding Hannah Cox, who lobbed the keeper to make it  4-1.

The referee awarded Phoenix with a dubious penalty decision shortly before half time, claiming hand ball in the box by centre half Kellie Hall, to make the score 4-2. In the closing seconds of the half, Caunter produced what was to be City's goal of the game, firing home a magnificent 25 yard strike into the top left corner. City started the second half with conviction, and a cross by right winger and latest signing Sian Aslett was headed home by Cox.

City were then awarded a penalty themselves when centre midfielder Naomi Wilkins was brought down. She placed the ball in the bottom left corner, making the score 7-2. City fired home four goals in quick succession, three from Cox and one from Caunter.

Cox had a further goal disallowed for offside. With City growing in confidence, centre half Jade Maryan picked up the ball from the half way line, and a quick one-two with Wilkins set her clear to punch the ball home for her first of the match. The final score saw City take the league title in a 12-2 win and maintain their unbeaten record for the season!

The ladies team would like to thank the Supporters Trust for their sponsorship this season. We would also like to make a few individual acknowledgements to Julian Tagg for his assistance the scenes and for his presence/support at several of our home games, Marc Astley for the recent press coverage in the Express & Echo, the Kellows Bootlaces team for their coverage of our final game, Andy Gillard and Mike Blackstone for publicising the team, and finally, to Steve Tully for giving up his free time to step in to manage and coach the team this season and for putting up with us! 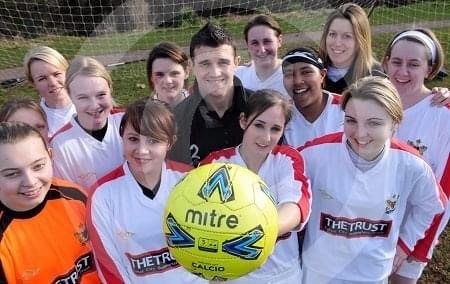