Sutherland joined Leeds from Sedgeley Park in July 1938 with a big goal-scoring reputation. A two-goal debut in the Reserves clinched him a professional contract and he also scored on his League debut. He forced his way into the Leeds team, after scoring sixteen times in twenty appearances for the Leeds Reserves. He played a big part in trying to keep Leeds in the game during his debut. The Yorkshire Post had this to say," Some thrilling incidents immediately followed, Sutherland dashing straight away from the centre kick and scoring for Leeds. Only Sutherland and Stephenson touched the ball between the kick off and the score. A few minutes later a penalty was awarded to Leeds for a foul on Sutherland by Taylor, but Hargreaves, who took the kick, shot straight at the goalkeeper." He played in three consecutive games as Leeds lost 1-4 at Molineux, 1-2 at home to Everton and 0-2 at Fratton Park against Portsmouth. He looked to have the makings of a good player but the war disrupted his career and those three games turned out to be his only games for Leeds in the Football League. He turned out for Leeds, scoring three times in five games in the Wartime fixtures. He played in the first two games of the 1940-41 North Regional League as Leeds drew 2-2 with Bradford City at Elland Road and Sutherland scored the second Leeds goal on his Wartime debut on 31st August 1940 and then there was a 0-1 loss to Newcastle United at St James’ Park in the second game. He did not play for Leeds again until the 1944-45 Football League Northern Section First Championship, when he played his final three games as a Leeds player in the first three games of the campaign. The first two games were at Centre Forward in a 3-4 loss at Bradford Park Avenue and a 3-3 draw at Elland Road in the reverse fixture and on both occasions Sutherland scored the third Leeds goal. His final game came on 9th September 1944 in a 0-1 defeat by Sunderland at Elland Road. He also guested for Accrington Stanley in the 1939-40 season scoring once in two appearances, then in 1941-42 he played once for Rochdale without scoring. In 1942-43 he played five games for Doncaster Rovers, scoring three goals and in 1944-45 he scored once in two appearances for York City. in war-time football before resuming his career at Elland Road.

He joined Exeter City in May 1947 and the Grecians gained special dispensation to play him in their final league match of that season at Walsall.

Never a regular starter in the Grecians team, Sutherland, who was subject of enquiries from Bournemouth & Boscombe Athletic, Halifax Town and Yeovil Town in June 1948, moved on to play for Barnstaple Town the following month and then Ilfracombe Town.

He was appointed player-manager of Bideford in the summer of 1952, but resigned the following January when he emigrated with his family to Australia.

In Australia he played for HAKOAH (MELBOURNE) and also coached at ALTONA CITY where he was named coach of the 40th Anniversary best Altona City team! 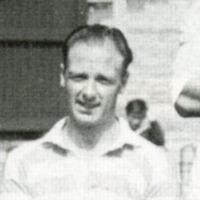 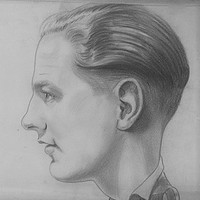 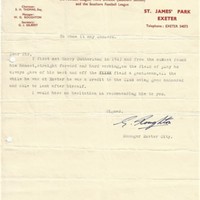 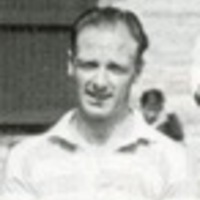 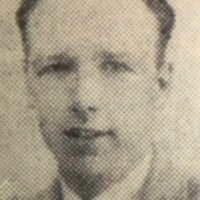