Signed from Exmouth United in 1908, Harold Sturge was mainly a reserve team goalkeeper during his two year stay at the club.

He did make one first team appearance though, that being against Crystal Palace in December 1909, when City lost 3-0 in London.

Sturge had previously played for Exeter City as an amateur and appeared in each of the four seasons between 1904 and 1908, his very first league game being in the East Devon Senior League at home to the 111th Battery Royal Artillery in April 1905.

Very little is known about the player, who returned to play for Exmouth United after leaving Exeter City. 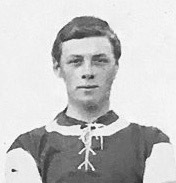