Streets was working in an engineering shop when he signed amateur forms with Grantham Town, but less than half a season later he had penned professional terms with Blackpool in 1924, where he made 14 league appearances and scored two goals.

He then moved to Clapton Orient in March 1927 and appeared in 12 league matches, scoring one goal. His progress there was hampered by a knee injury.

Streets signed for Exeter City in the summer of 1928 and made his debut in a 2-1 home defeat against Southend United.

During his one season stay at St James’ Park, he netted twice, a goal each against Brentford and Charlton Athletic.

After leaving the Grecians he spent some time playing for Cork in Ireland, before moving to the North East to play for West Stanley.

Stanley Streets died in Newark on the 29th January 1961. 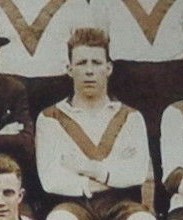