"The first official match played by women took place at Crouch End in London on 23rd March, 1895. The girls were organized into teams that represented North and South London. The Manchester Guardian reported: "Their costumes came in for a good deal of attention.... one or two added short skirts over their knicker-bockers.... When the novelty has worn off, I do not think women's football will attract the crowds."

The Daily Sketch reporter claimed: "The first few minutes were sufficient to show that football by women, if the British Ladies be taken as a criterion, is totally out of the question. A footballer requires speed, judgement, skill, and pluck. Not one of these four qualities was apparent on Saturday. For the most part, the ladies wandered aimlessly over the field at an ungraceful jog-trot." North London (red), beat South London (light and dark-blue) 7-1.

The Sportsman newspaper was much more supportive: "True, young men would run harder and kick more strongly, but, beyond this, I cannot believe that they would show any greater knowledge of the game or skill in its execution. I don't think the lady footballer is to be snuffed out by a number of leading articles written by old men out of sympathy both with football as a a game and the aspirations of the young new women. If the lady footballer dies, she will die hard."
From Spartacus Educational

The British Newspaper Archive has an article from May 14th 1895, less than two months after the first official match, reporting on the 1st exhibition of football played by “Ladies” in Exeter attracting a crowd of over 2000 to a match played between North v South, of the British Ladies Football Club. 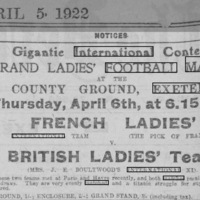 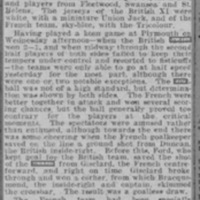 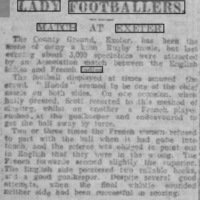 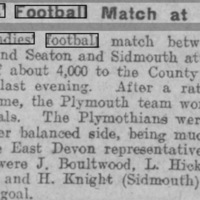 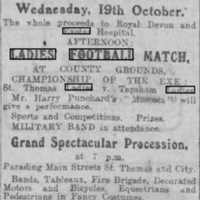