Playing for Selby Town, Squires joined Doncaster Rovers in September 1937 and featured in 21 league games for them, all being in the 1947-48 season.

After turning down Peterborough United, he signed for Exeter City in July 1949, but only made one league outing which was against Leyton Orient at Brisbane Road in September of that year.

Squires signed for Weymouth in the summer of 1950, and then Ilfracombe Town for the start of the 1952-53 season. He joined Minehead in May 1954.

Robert passed away in Salisbury on the 21st March 2011. 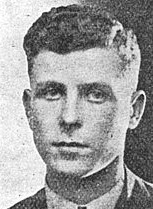