Willow played in the squad that won promotion to South West Football League Western division and the Bristol SoccerWorld Cup and were also runners up in the Devon County FA Cup.

"As you might guess from her choice of favourite player, Willow is a defender. She has always had the ability to read the game and anticipate danger. She's an 'interceptor' rather than a 'stopper'.

She went through a bit of a dip in form in her early teens (a common problem), but is now back to her best. She is now training with the Exeter City Ladies team and will hopefully be signing for next season.

Always the first one at training and one of the nicest girls you could hope to meet. The major challenge for Willow is to learn to open her mouth on the pitch she is as quiet as a churchyard mouse!" 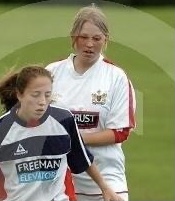