Exeter City started the 2020/21 season in the Women's National League Division One West after finishing third in the abandoned. 2019/20 season. 
After a Championship winning 2018/2019 season, one in which the team scored a staggering 100 League goals, how Exeter City responded to the challenge of the National League was always going to be fascinating to watch.

With the Season sadly voided due to COVID restrictions, the team sat in 3rd position in a technically superior, more physical league than the one from which they had come from, representing a fine transition into a higher division. Perhaps nothing underlines the development of the team greater than the two fixtures against Southampton, each end of what was to prove a curtailed season.

Suffering an 8-2 defeat in September, City would only suffer a narrow 2-1 defeat in March, a considerable achievement and declaration that they had arrived as a National League side. Sadly the Senior Devon County Cup Final was also voided, but a final appearance to add to an ever improving league season, left everyone connected with the team both proud and excited for what is to come.

There were some significant individual achievements for the season. Kyanna Orchard won the Young Player of the Year award. Coming into the side at only 16 years of age, Kyanna's bravery and shot stopping were a big asset and helped establish her at No.1. Ella-Mae Miller won the Manager's Player of the Year Award. On her second season at senior level, the attacking full back continues to shine, showing intelligence in possession and excellent positional awareness. Finally, Danielle Tyson won the Player's Player Award. A skilful midfielder whose improvement last season came at an accelerated pace. With good vision and an eye for goal, Danielle will continue to be one to watch.

One of the main success stories to come from last season was the recognition for the talents of Georgie Barbour-Gresham. Georgie was called up to the England College's Under 19 side and it represented a noticeable achievement for "one of our own." Georgie would not only be Vice Captain for the team's tour of Italy, she would also Captain the side throughout their WSL Academy Cup campaign. To emphasise the impact Georgie made in her time away with the National side, she was awarded the Luke Buckingham Award for the Female Player of the Year for the 2019/2020 season. As a club we proudly articulate the development of the likes of Ethan Ampadu, Ollie Watkins and Ben Chrisene, Georgie Barbour-Gresham has every chance of emulating their successes in the Women's game and we should be equally proud and vocal of her achievements. This type of progression does not come without hard work, the commitment put in by Georgie and the coaching team to allow such an opportunity to arise must be applauded. National recognition for a player developed at Exeter City is vindication for the work being accomplished within the Women's section and evidence that the methods are working. With the new season fast approaching, the management team have been busy assembling a squad to progress the side further. Phoebe Baker arrives from Bideford. Tenacious, energetic and an ability to move the ball quickly, Phoebe will add balance to the midfield. Steph Beck's signing from Plymouth Argyle will provide experience to the squad, alongside her quality. An intelligent midfielder who will give guidance to her younger team mates both on and off the pitch. With two of last season's Annual awards presented to Development Centre talents, Esme Kilburn-Thompson is next to make that step up. A quick forward player with an eye for goal, it is hoped Esme can adjust to senior football and surprise some of City’s National League opponents over the coming months.

With the experience of last season now behind the team, the ambition for this year is to once again be competitive. Grecian's manager Clive Watts explains. "Our aim is to achieve a top four finish again; a good cup run would be nice too. Most of all it's about development and playing an attractive brand of football."

Exeter City Women's set up is growing fast. There are nearly 100 girls in the development programme and the successes of Tyson, Miller and Barbour-Gresham will act as an inspiration to those looking to progress into the senior side. With an infrastructure in place to promote young talent, Exeter City are a team on the up, with big ambitions to strive forward with. Our Club ethos is focused on development and progressing alongside the improvements of those players, Exeter City Women's squad are the epitome of that ethos. This is a group of hard working, committed people who are going places, make sure you play a part in their upward journey by supporting the team throughout this coming Season.

On Tuesday 3rd of November it was announced that the Women’s National League would be suspended in line with the Government Lockdown restrictions, pausing play until December 2 at the earliest.

Clive Watts, of the Exeter City Women’s Management Team, was naturally disappointed, but understood the decision. “It was expected and the health and safety of everyone is paramount and must come first in these strange times; it's just another hurdle all clubs will have to get over as we're all in it together.”

City have made a confident start to their League Campaign with two wins and a draw, their two defeats coming against formidable opposition in Chesham United and Southampton FC.

Clive is happy with the way the team has been shaping up. “The squad has gelled really well, from the youngsters coming up from the development centre to the senior players arriving. The whole squad is evolving and working really hard in training to implement our ideas and game plan. Our style of play is pleasing on the eye and you can see that everyone enjoys playing it. We are about where we want to be as we've had a tough start playing a lot of the top sides, so when we return we will be looking to push on again and finish the season strongly."

Alongside a strong start to the National League Season, City have also progressed to the First Round of the FA Cup after victories over Swindon Town and AEK Boco. “The girls love a good cup run to break up the season, and with a First Round Proper tie at home to Cheltenham Town coming on our return to playing, it will keep a real buzz around the squad.”

So whilst the Season may be halted, Clive is certainly pleased with what he has seen so far as the Team continues to evolve on and off the pitch. “All in all it has been a great start with some really pleasing attendances. With the media work, new Women's Supporters Club and new sponsors getting behind us, it helps give us a more professional feeling. The future is looking bright.” The conclusion of March was greeted with bad news, another curtailed season at National League Level and the prospect of the break from football lasting beyond the three months that had already been endured. However, the nationwide relaxation of restrictions for social groups did allow for a return to training and, within a couple of weeks, the mood was lifted as a return to competitive football was agreed. The Devon County Cup would go ahead and the motivation to win a trophy became a driving force before the summer break.

Significantly, City were undergoing some off-field changes. Clive Watts stepped away from his role whilst convalescing from knee surgery, the announcement soon following that Abbie Britton and Aaron Wakley would take over the reins. The duo wasted no time in adding to the playing squad as experienced defenders Mollie Taylor and Jaydee Seaman signed from Buckland Athletic and Plymouth Argyle, respectively.The Grecians returned to action in slick style, disposing of Feniton in Round One of the County Cup. Goals from Steph Beck and Mollie Taylor were accompanied by a hat-trick from Connie Pengelly. A friendly fixture against Callington was next up and City hit six this time. Goals from Robinson, Taylor, Watkins, Pengelly and Beck were upstaged by a late strike from Development Team graduate Jess Sandland in what was only her second appearance.City would travel to Ivybridge to face Marine Academy for their Semi Final fixture. Two goals from Pengelly and one from Anthea Kaptein looked to have the Grecians cruising, before two late strikes from the Plymouth side set up a nervy finish prior to a place in the County Cup Final being confirmed.Visiting Cardiff City Ladies were the friendly preparation before the Final and, as higher division opposition, offered a challenge to a team that had come back from lockdown so strongly. Showing the ability to compete against such strong opposition, City took the lead through Jess Sandland. Despite the game being level at half time, goals from Taylor, goals from Taylor, Baker and Kilburn-Thompson gave the Grecians a 4-1 lead, an advantage that would survive a late Cardiff fightback, as the game ended 4-3.
The final game of a stop start season was to be the Devon County Cup Final. A final played against rivals Plymouth Argyle, no less. More higher division opposition and more success. Two first half goals from Esme Kilburn-Thompson saw City take the trophy, despite a late Argyle consolation, and finish the year on the highest of highs.

Whilst many Clubs will have felt the return to football for a few weeks before the summer interval was a period that offered little chance to progress, for City, it was anything but. The new management team of Abbie and Aaron were able to implement their ideas and settle in two new signings with considerable success, both Jaydee and Mollie are players that have already considerably improved the group. Of the twenty goals scored by the Grecians in this end of season period, eleven came from players developed at Exeter City and under the age of eighteen. Young Forward Connie Pengelly finished the year as the Team’s top scorer and was awarded the Exeter City Women Supporter’s Club’s Player of the Season in a fan’s vote. City would win all five of their fixtures and finish with a Trophy, it really could not have gone much better.

Off the pitch things continue to improve, a strength and conditioning coach, alongside a performance nutritionist, will be on board with the team this season, offering more professionalism to the group. Interest in the team has increased, with attendances up on previous years and the team even featuring on BBC Spotlight before the Cup Final.

The final cherry on top of the cake came a week after the victory against Plymouth, Captain Manfy Sharpe, Emily Toogood, Steph Beck, Phoebe Baker and Anthea Kaptein travelled to London to take part in the Neymar Jr Five’s Tournament and only went and won it! As the UK National champions, the City quintet will get the chance to fly to Brazil later in 2021 to compete in an international tournament. Exeter City players and an adventure in Brazil, an historical connection.
The team returned to training in July, with all players retained from the end of the past season and some new additions likely. Momentum is a key factor in football and Exeter City Women’s Team have it in abundance. It looks set to be an exciting 2021/2022 Season. 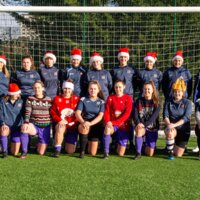 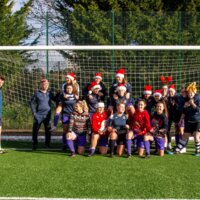 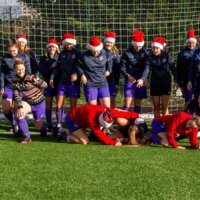 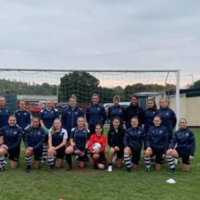 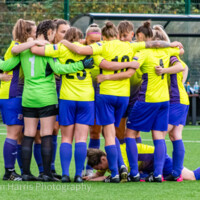 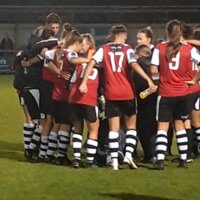 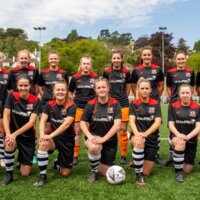 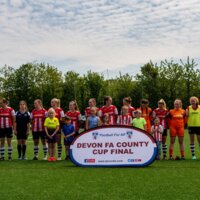 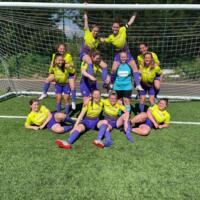 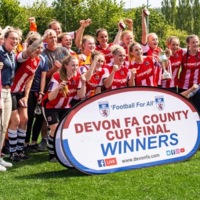