Signed on amateur forms from Bideford during the 1938-39 season, Southcombe got his Football League chance when he made his debut for Exeter City in a 1-0 win at Southend United in April 1939.

He was to play one more game for the Grecians at home to Swindon Town ten days later.

With the following season abandoned due to the Second World War, Southcombe didn’t feature again and it is believed he retired from the game.

Roy seems to have been quite a sportsman in his youth winning various athletics events, including an egg & spoon race on bikes in 1931 at Chulmleigh.
Football teams - Chulmleigh, (1931,) "a junior team in the Cornish league," (1932) South Molton (1934,)
Exeter and Plymouth Gazette - Friday 02 September 1938

“It was pleasing to not that an old Chulmleigh boy, Mr Roy Southcombe, scored one of the goals for Exeter City Reserves, which gave them the victory over Cardiff City Reserves last Saturday.”

The reason Southcombe didn't play the last home match of the season 38/39 was due to him helping Bideford in an amateur cup final.

“Seventeen goals, including two sixes," is this season's record of Roy Southcombe, Lynton's centre forward. He began his playing career as long ago as 1932 as an outside forward for South Molton.
From there he went to Bideford and re mained a regular member of their Exeter and District League team for several seasons before the war.
He gained & Devon Senior Cup finalist medal with them and made several appearances in Division III. League football with Exeter City. During the war he played in a number of Service represeniative sides and was picked as a reserve for Western Command. He is now on the staff of Lloyds Bank, Lynton, a stroke of luck that the local club have turned to good effect.” 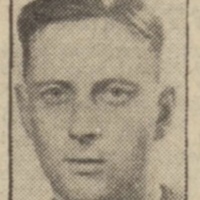 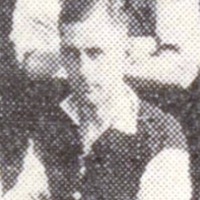 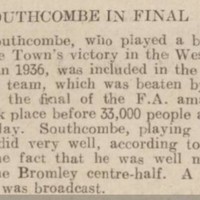 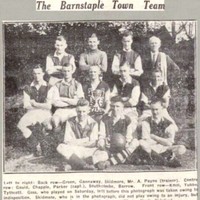