When Exeter City met Crystal Palace at Sydenham last season, in the month of January, the Glaziers were at the top of the table, sharing the honour, to be precise, with Queen's Park Rangers. The City won by a goal to nil, and that victory followed a reverse at home which the Grecians had sustained against Merthyr Town a week previously. The win at Sydenham, however, saw the beginning of their rapid rise to the leadership which they attained to last Easter Monday.

Today Exeter once again visited the Palace when the latter were at the top of the table, sharing the honours on this occasion with Swindon, and leading the way by virtue of home wins against Portsmouth and Northampton, and drawn games away against Northampton and Millwall. They were this morning, in consequence, an unbeaten side, and regarded their match against Exeter with the utmost confidence. In fact, they looked forward to a runaway victory.

The selection of the City team was left open till yesterday, and the directors had delayed making the chosen eleven known owing to the fact that McCann was on the injured list. The Palace made one change from the team which beat Northampton on Wednesday. Whibley was then hurt and was replaced by Davies, who crossed over from outside-right to outside-left, and B.J.Bateman, an amateur, made his first appearance in Southern League football.

The Grecians arrived on the ground half an hour before the start of the game. The weather was then fine, and the ground appeared to be in perfect condition. There was only a small crowd when Crystal Palace came out in their cardinal and blue colours. The City, for whom Marshall was making his first appearance in the Southern League, met with a good reception, and evidently had plenty of supporters present.

Kirby won the toss and the Glaziers had to face the sun. Smith started the game prompt on time, but his pass to Bateman went into touch. The City defence had to be very wary, and Strettle was soon in action, whilst Pratt just afterwards dispossessed Smith.

When Exeter broke away Brooksbank's pass to Whittaker found the winger clearly offside. After Bateman had beaten Marshall, a swinging pass by him was intercepted by Kirby, but the City captain put too much force behind the ball in attempting to find Brooksbank, and Colclough cleared without difficulty. Strettle then put Kirby in possession, but Collyer intercepted his pass to Whittaker.

The first corner of the game was won by Exeter, and good passing between the forwards ended in Whittaker lobbing the ball into the centre, and Brooksbank, dashing in, shot hard for goal. It was a great drive which Johnson was glad to be able to tip over the bar. From the flag-kick Kirby and Lee were well placed for the ball, but hampered one another and an opportunity was lost.

This corner, however, seemed to have an inspiring effect, for Exeter's forwards were playing better than in any previous game

At the City end Pym had to handle but was fouled by Williams, then Hewitt fired over the top from Bateman's centre. Exeter then made another spirited effort, and it was some time before the home defence could drive them back. Williams next tried to cut through, and was unceremoniously bowled over, but the Glaziers' appeal for a penalty was ignored by Mr Buffey. The Palace at last forced a corner which was headed away by Rigby after Pym had punched out the flag-kick.

After a long attack by the Palace, Brooksbank broke clean away, and took the ball almost to the goal-line. The angle was awkward, however, and in trying to steer the leather across he merely gave to Collyer. There were escapes at both ends, and once Bateman sent across a beautiful centre which Pym could not reach, but Fort got back to kick clear. The City afterwards had a chance when Lee passed right across the field to Whittaker, who put Lovett through in a favourable position, but the inside man was too slow.

The second half continued in the same vein, with honours just about even, but nothing was scored. Exeter's best players were Fort and Strettle in the defence and Whittaker in the attack. The new half-back, Marshall, found the pace of the Southern League a bit too hot, and was unable to subdue the tall Bateman.

McCann, not considered sufficiently fit for the first team, was chosen to lead the reserves' attack, and he kicked off against a light breeze at St. James's Park. Exeter immediately got through to the visiting goal, but ran the ball behind. Lugg then ran out and punched away a shot by McCann, and in the next City attack the centre-forward was pulled up for offside.

Goddard cleared a rush by St Austell, and after Evans had put behind the visiting forwards got away in a line, and Frayn easily beat Loram from close range.

Exeter attacked on the restart, but their (there) was nothing to cause any enthusiasm in their play. Harding stopped the visitors' left wing in good style, and Hunt sent behind from a free-kick. Exeter were awarded a penalty for hands, but Harding's shot was tipped over the bar by Lugg. McCann eventually equalised the score with a fine first-time shot, and just before half-time Lugg conceded a corner from which Harding volleyed the ball right out into Oxford Street with a tremendous drive.

St Austell restarted, and McCann broke up the move and took the ball almost to the goal-line, but his shot went right across the front of the goal and out of play. He was continually prominent with good work, once heading just wide in a fast attack. The City were now having nearly all the play, and from Orr's centre Lewis lofted the ball over to the right, and Baker, running in, headed a fine goal. Evans shot narrowly wide, then McCann put in a fierce drive which rebounded back to him off the goalpost, and at the next attempt he beat Lugg all ends up. Shortly after restarting Lewis sent out a nice pass to Orr, from whose centre Lewis scored with a good left foot shot.
Five minutes from the end St Austell broke away, and from a shot by Uren the ball hit Harding and went into the net. 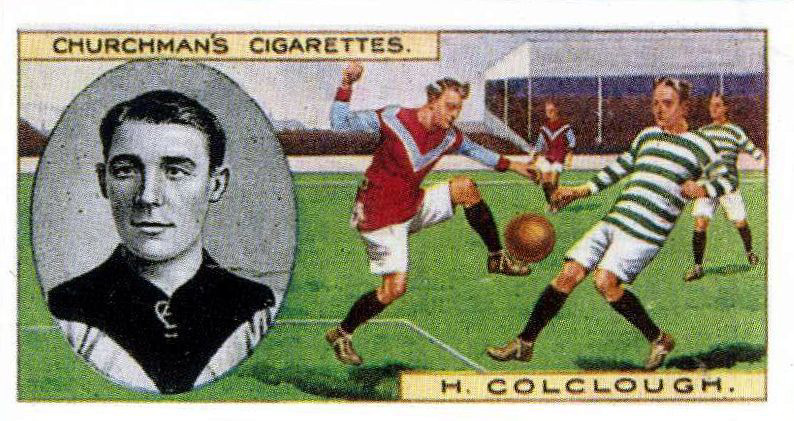