Billy Light made his name as a cricketer but also turned out for Exeter City Reserves.

He was among a group of new City signings at the start of the 1905-6 season. The Western Times on 30 August reported:  ‘Up to the present no fewer than 60 players have signed on for them, and many more are expected to do so,  so that the club will in no way suffer for lack of Reserves. The signature of the Rev Reid has again been secured, as has also that of Brooks (who played for Tavistock last season, Clarke (of Taunton), Sturge (of Exmouth) and Light and Budden the two Devon cricket professionals’.

Light was soon in action for the City Reserves playing at St James Park v Torquay United on 30 September in front of ‘a considerable number of spectators’. The Devon and Exeter Gazette reporter was not impressed and in the following Monday’s edition his verdict was ‘Light was lazy, and did not show anxiety to run after the ball’. Light’s cricketing companion Budden was better thought of: ‘Budden was the most prominent man’.

Billy Light was clearly a better cricketer. Born in Winchester in 1878 he was educated at Marlborough College. An all rounder (left hand bat, right arm bowler) he made his first class debut for Hampshire in 1897 and went on to make 12 appearances for his home county.

But it was with Devon that Light really made his name.  He was employed as a professional at the County Ground, Exeter and started playing for Devon in 1902 in the Minor County Championship. Light went on to play in 164 games for the County up until 1928. His county records are formidable. Light is fourth on the list of all time Devon run scorers (6,382) with seven centuries and 38 fifties; top score 157. And he is second on the all time list of Devon wicket takers (584) including seven 10 wicket hauls and 39 five wickets; best 9-55.

Billy Light died of a heart attack at home in Exeter on 10 November 1930.  He is buried in Higher Cemetery where his memorial stone displays cricketing motifs. 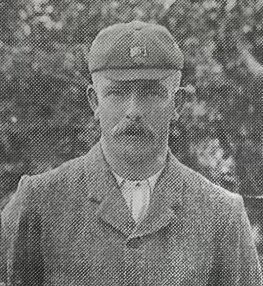